0 HTA MAKES CASE TO DEFRA FOR GROWERS COMPENSATION IN THE WAKE OF CHALARA FRAXINEA.

HTA MAKES CASE TO DEFRA FOR GROWERS COMPENSATION IN THE WAKE OF CHALARA FRAXINEA. 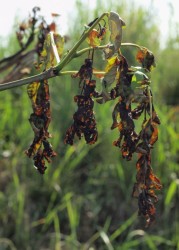 The HTA met with Lord de Mauley at Defra yesterday to reaffirm the industry's whole-hearted support in tackling the Chalara fraxinea outbreak, but also to highlight industry concerns about the commercial ramifications for growers.

The ban on the import and movement of ash has effectively made this year's ash crop redundant, and UK growers face potentially crippling financial losses. In addition, some nurseries have already incurred expensive costs in complying with destruction orders served on tress that are infected, or considered at risk of infection. The HTA warned the Forestry Commission and Fera of the disease, and requested that the authorities should introduce an import ban to protect the UK from the disease, as long ago as 2009. The response at the time was that the pathogen was already considered endemic in Great Britain and quarantine measures were therefore not appropriate. However, in 2010 science caught up with the nature of the disease and identified the new, more virulent strain which had been causing the damage in Europe.

Lord de Mauley acknowledged the difficulties that growers faced but did not want to raise expectations of the prospect of compensation. He reiterated the government's long standing policy to commit the plant health budget to disease surveillance, control and research rather than compensation. Nonetheless, he undertook to consider the situation carefully in light of the impending results of a HTA survey that will more accurately reflect the true commercial ramifications for growers.

Carol Paris, HTA Director General commented "We were grateful for the opportunity to raise our concerns with the Minister who clearly understood the financial implications of this particular disease. We realise that the government's historical stance is not to provide compensation to plant growers, but we believe the current situation represents exceptional circumstances especially since the industry recommended an import ban three years ago".

Tim Briercliffe, Director of Business Development added "We took the opportunity to draw attention to the EU budget mechanism that would appear to allow HMG to claim up to 50% of control costs and 25% of loss of earnings' compensation for growers. This would compare with the compensation provided to farmers in the wake of BSE and Foot and Mouth epidemics, and we hope that the Government will respond sympathetically to our growers' plight in the current circumstances. If not, we may need to resort to legal advice on how best to safeguard the industry's interests".