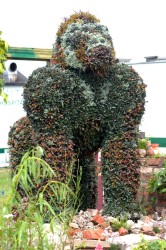 Scotland's national gardening show, which closed on Sunday, attracted one of the highest audiences in its history.

The organisers of Gardening Scotland 2011, which ran for three days at the Royal Highland Centre in Edinburgh, say that 40,000 people passed through its gates this year - and increase of 5,000 on last year's total.

Show organiser Martin Dare says that the increase in numbers was largely due to the fact that, after 12 years, the Show has come to be regarded as a fixture in the gardening calendar.

"There is nowhere better to buy plants than at Gardening Scotland and gardeners now recognise that fact. For example, this year amongst the many top growers represented in The Dobbies Floral Hall we had 18 nurseries that had just received medals at The Chelsea Flower Show before heading north to Edinburgh for Gardening Scotland."

This year's visitors were not put off by temperatures that soared to 29C on the Friday and plummeted to just 12C on subsequent days and many exhibitors recorded record sales.

Amongst the winners at this year's Show were a Show Garden that featured a giant gorilla made from plants standing in front of a door that had been shattered in a Police raid and an indoor exhibit to mark 90 years of The Scottish Poppy Appeal.