Morris was quizzed on the team's performances this summer, the departure of groundsman Keith Exton and the future of the county championship schedule 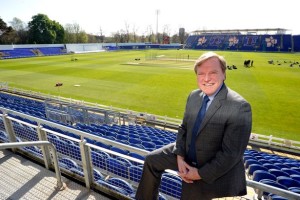 He was quizzed on the team's performances this summer, the departure of groundsman Keith Exton and the future of the county championship schedule, among other subjects.

Here are some of the highlights of the meeting.

Q: Are you pleased with the team's progress so far this season?

A: As far as our championship season is concerned, it was always going to be a challenge, because we've got quite a small squad, with only 15 full-time professionals.

We've got some really talented players in that squad and I think they performed really well in the first half of the summer winning four games on the bounce in the championship for the first time in many years, putting us in a really good position just after halfway through the summer.

It's fair to say the second half of the season has been more of a challenge and at times disappointing. But that's a reflection of our best players having to play in all formats of the game and there's a certain amount of tiredness that has crept in.

But with these three games left if we can finish the season off strongly and be in the top three or four of the championship it will certainly be progress made.

The biggest challenge we have is with the seam bowlers. Michael Hogan is a really outstanding bowler and he has proved that every year here. He's a real willing workhorse that can get you 50 wickets.

Graham Wagg and Craig Meschede have had good seasons and we have some young bowlers still in university and some others younger than that who are not quite ready to step up on to the first-class stage as yet.

The workloads on our fast bowlers is significant and although they've coped with the task manfully, it's certainly an area we need to target in terms of recruitment over the next 12 months or so.

Q: What were the circumstances around the departure of former head groundsman Keith Exton?

A: The Hampshire game was a bitterly disappointing episode for all of us. Subsequently we've had the entire ground surveyed and we've had some recommendations back to us in terms of what we should do next, particularly with pitch nine which was the one we played on.

We will in the next month or so be digging the pitch up and relaying it and we won't be using that pitch for first-class cricket for two to three years, and we will play some second XI cricket on it before hand to make sure its re-bedded.

We had discussions with Keith and it was felt that the time was right for both parties to move on. We have done that with a mutually agreed contract and subsequently Robin Saxton has taken over with the rest of the ground staff to produce an international T20 pitch and obviously the one you've seen out there for this championship match.