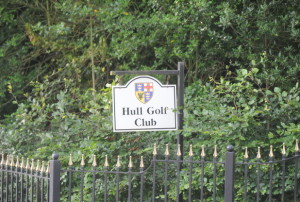 Almost £300,000 has been stolen in a scam at Hull and East Riding's most popular golf course.

Police have been called in after the huge sum, including golfers' subscription fees, was emptied from the account of Hull Golf Club.

The club has now sent a letter to its £1,000-a-year members after what it described as "the most sophisticated banking fraud" took place in late May.

The 112-year-old club in Kirk Ella is popular with high-profile businesspeople and has counted Hull City players among its 800 members.

In the letter to members, club chairman John Jackson says "with profound regret" he has to report that "a sum approaching £300,000 was removed from the club's bank account."

He goes on to say "a partial although small" amount of money may be recovered, but it is likely the "scam fraudsters" will escape with the bulk of the cash.

It is thought the money included members' annual subscription fees.

An investigation has now been launched by Action Fraud, the national fraud and cyber crime reporting centre.

The club says its own "governance and internal controls" will also be investigated.

Independent experts said the crime had all the hallmarks of a "targeted attack" on the golf club.

John McDowell, managing director of Encription Limited, a digital security company, said: "Sports clubs make ideal targets. It sounds as though this was a targeted attack, and I say that because most large organisations have already been attacked, and so have taken the necessary precautions to protect themselves.

"They are therefore much, much harder to hit, and it has forced hackers to go for the low-lying fruit, as it were - the golf clubs and small businesses."

Mr McDowell said: "The biggest weakness is people. People like to be helpful and scammers exploit that.

"They will phone businesses, as well as individuals, saying they're from the bank and could they have account numbers and passwords."

The impact on subscriptions at the club is not yet known.

The club, which currently has a nine-month waiting list to join, was founded in 1904, at a site just off Anlaby Road, west Hull.

In a statement, Hull Golf Club said: "It appears that we have suffered at the hands of very cleverly organised scam fraudsters. We are cooperating fully with the Action Fraud. Despite this setback, the club is able to continue to provide normal services to members and visitors. Our members and staff have been informed."