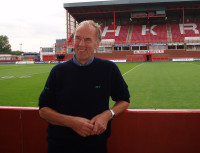 Hull KR Groundsperson Malcolm Taylor will be presented with the Brian Cartwright Award at the engage Super League Grand Final after being selected as the Rugby League groundsperson of the year.

The RFL runs the annual competition to recognise and reward the efforts of the men and women whose hard work on Rugby League playing surfaces contributes so much to our exciting game.

The trophy is named after the late Brian Cartwright who was the RFL Groundsman at major events for many years and was also a well known and well respected figure within the sport.

Malcolm Taylor, Hull KR Groundsperson, said: "Winning this award is great news; there has been a lot of hard work carried out on the pitch during the season by several members of staff."

The RFL received more than 20 nominations for the award which was won last year by Leeds Groundsperson Jason Booth.

The nominees were then whittled down by an expert panel to a shortlist of Tommy Johnston and Stan Grieves from Whitehaven, Ian Forshaw from Wigan and eventual winner Malcolm Taylor from Hull KR.

The short listed clubs were then visited by Dave Saltman, Managing Director of Pitchcare, who had the tough job in deciding the winner.

"He displays good knowledge and understanding of his trade, is clearly a stickler for good practice and has had good and varied experience in groundsmanship throughout his working life.

"For a traditional soil based surface there was excellent grass cover, and this was made more impressive when it was highlighted that the pitch is used for about 20 hours per week for training and games."

Dean Hardman, RFL Operations Manager, said: "The Brian Cartwright Award is there to reward hard workers such as Malcolm who achieve excellent results and take great pride in their work."

Malcolm will receive the Brian Cartwright trophy at half time during the engage Super League Grand Final on 4 October at Old Trafford.