Hunstanton Golf Club were so impressed with the quality of cut from the Jacobsen Eclipse 322 they had on demonstration, that they brought forward the purchase by a year. 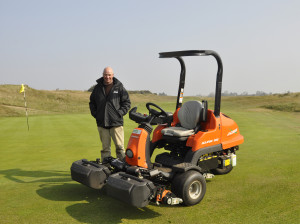 Local dealer Bartram Mowers demonstrated the machine in May 2014 and left it with head greenkeeper Peter Read and his team for a week in the run up to a major member and guest competition to raise funds for the local RNLI. They were so impressed by its performance that, with the backing of the Greens Committee, they brought forward the proposed purchase by a year. They took delivery of their new machine in the first week of July 2014.

Peter Read has been at the club 28 years and became head greenkeeper three years ago. He heads a team of just six, so there's always a job to do around the course. Commenting on the qualities of the Eclipse he said,
"In the week leading up to the RNLI fundraising event, the machine literally sold itself to us! We had the unit with 15-blade cutting cylinders and it made such a difference to the quality of the greens in just the five days that we used it.

"Our normal stimp speed is between 9 feet and 9.5 feet, but mowing at the same height of 4.25 mm, with an FOC setting of 2.4, we were getting a consistent 10.5 feet. Even when we gave the greens a light roll it made no appreciable difference. We've always used Jacobsen Greens King IV ride on mowers, since they were introduced some 30 years ago, so it takes something really special for us to change." 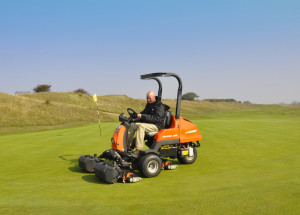 Golf course consultant Gordon Irvine was contacted by the club some four years ago because the intensive mowing to produce fast greens was causing significant issues to their major asset. A combination of his experience of links course, a change in cultural practices and the efforts of the greenkeeping team have resulted in their recovery, which has been further enhanced by the Eclipse 322.

"Many years ago, from the early 1980s through to 2000, we regularly mowed at 2 mm," Peter Read added. "We began raising the height of cut around 10 years ago and now, with the Eclipse at 4.25 mm, we're more than double the height, but still reasonably quick.

"Consistency of cut across all 18 greens, significant fuel reductions and a swing out centre unit for easy maintenance are all great features, but do you know, the only drawback is the cutting unit motors; when they engage they play havoc with my radio!"