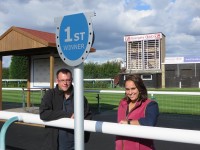 Managing the turf at a popular National Hunt racecourse, renowned as the 'nursery' for the sport's rising stars, with just four groundsmen can be challenging. But an experienced head groundsman and dedicated team helps Head Groundsman, Shaun Reilly, achieve high standards at Huntingdon.

With up to eighteen fixtures from August to May, the highlight is the Grade II Peterborough Chase in December, which often reveals the young pretenders for the championship races held at the Cheltenham Festival the following March.

"It is with great pleasure that we see horses that have started their steeplechase careers here move up the sport's ranks," says Sulekha, "and our flat, relatively easy track is popular with trainers looking for races for their good novices, so we maintain it with that in mind."

However, the early December date of the Peterborough Chase means that it is often at the mercy of the weather.

"We sit on a flood plain," explains Sulekha, who is also Clerk at Warwick, having taken up the twin track role after moving from Market Rasen.

"A brook runs round the course and goes underground via a culvert which overflows in flood conditions."

The water's rise can be dramatic, she says; "In forty minutes it can cover the front of the stand and runs through the stables, which then have to be cleaned out and disinfected. We also have to deal with debris washed on from adjoining farmland, although the water goes down so quickly that it rarely damages the turf."

Racecourse infrastructure has been designed to resist flooding, with non-return valves fitted to drains in the Cromwell Stand and flood defences throughout the buildings.

"We can turn the racecourse round in seventy-two hours after a flood," comments Sulekha. "We just have to wait for the water to go down, although we do have some pumps. We are looking at drainage options for the future. There is a comprehensive drainage system in place and the water flows into the lake in the centre of the course which is also used for irrigation but, once it has flooded a few times, the whole system can back up."

The open aspect of the course and its proximity to the Fens means that strong winds blow across, quickly drying out the ground, which is clay over gravel, but this also rules out a summer jumping campaign.

Like other courses, Huntingdon deploys frost covers to protect it from wintry weather, and the entire course has been fleeced on occasion. 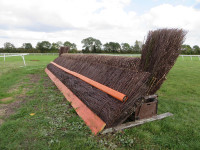 "It's not a perfect solution," admits Head Groundsman, Shaun Reilly. "You can still lose a meeting to low daytime temperatures, and covering requires a large amount of expensive labour for a small track like this. Then, if it snows, you can't get the covers off, which can kill the grass."

One of the most significant tasks undertaken by Sulekha and Shaun has been a programme to survey the bends, allowing rail movements using triangulation. "This gives a consistent angle on the bend regardless of where we place the rail, and we have also invested in portable fences, which allows the running line to be altered to take account of the new bends and use the best ground," says Sulekha.

Four portables have been purchased - one from Haydock Racecourse and the others fabricated locally, with their design tweaked to hold the birch in place more securely.

"There are lots of advantages," comments Shaun. "We pull the fences off the track after racing and it is easier and quicker to mow, plus compaction from shuttling around the fence is reduced. We have also been able to re-site them slightly, for example moving the last fence in the home straight closer to the finishing line, giving the jockeys more time to straighten up, so it now jumps better." 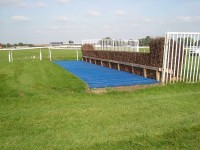 The open ditch on the home straight has also received some attention - the approach to the fence is ramped up slightly to give a slight drop on landing, which makes for an impressive leap by the horses as they pass the grandstand.

"The ramp had become uneven and developed a 'crown' so, this May, it was levelled and reseeded. We were able to race on it at our August meeting."

"There had been a number of injuries to horses from the concrete tray traditionally used to hold the water at courses across the country," explains Shaun. "We excavated down below the tray, put a drain in, filled it with sand and fitted a blue 'astroturf' carpet. It is completely level with the turf, so there is no risk of injury if the horse hits it."

Safety and comfort were dual drivers behind upgrades to the winners enclosure, which now has a rubberised surface.

"We made the winners enclosure a bit larger for safety and got rid of the turf which often became muddy in the winter and was not ideal for lady owners wearing smart shoes!" says Sulekha.

Shaun, who has been at Huntingdon since 2008, has revamped the machinery fleet to make routine maintenance more efficient.

A John Deere 5720 was purchased - soon to be joined by a pair of new 5085M tractors - to pull a 'new' Port Agric roller mower, leaving the old Votex to cut the thirty-two acres of car parks.

"It offers more suction for a cleaner cut. We cut down to 2cm in the summer and, once we start watering for the autumn meetings, gradually take it up to 8-10cm. With Port Agric no longer in the market, we will have a rethink when it needs replacing - a WAM would be ideal," he says.
A new Teagle XT24 fertiliser spreader also joined the fleet, offering the increased accuracy to move on from using agricultural products to more targeted applications.

"We use a Blaukorn outfield fertiliser, followed by Multigreen 28:0:0 slow release in the summer, 23:15:0 in the autumn and 15:0:22 at the end of the winter," says Shaun. "It makes a terrific difference - if the weather stays mild, we get grass growth right into December."

The purchase of a Verti-Drain allowed Shaun to take decompaction work in-house, allowing him to work on the track during gaps in the racing programme and in ideal soil conditions rather than relying on a contractor. Sulekha adds; "with the increase in contractor costs, it also makes financial sense to have our own machine."

A Charterhouse 2075 overseeder was also added to the fleet, again improving flexibility compared with borrowing a machine from Newmarket.

"I will overseed the main racing lines in early autumn and after the first couple of meetings, and also when preparing the ground for the Peterborough Chase, which is railed off to keep it in optimum condition for that meeting," explains Shaun. "Then, in the spring, I will assess the course and overseed any worn areas."

Pro Master 79 treated seed is used and Shaun comments that, whilst he has tried different combinations of seed, this mix of 30% Ponderosa, 40% Verdi and 30% Platinum perennial ryegrass works well. "I have seen seeds under floodwater, and then frozen up, but as soon as the weather improves they are away!" 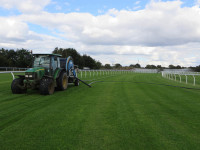 Irrigation is provided by a pair of Briggs booms, fed from the lake via a submersible pump to a ring main, and starts six weeks before the August meeting, with 15mm going on most days, which takes around thirteen hours.

Spraying is carried out on an annual basis by a local contractor using a selective herbicide.

All of these operations provide a significant workload for just four men, and Shaun admits that the good growing conditions have made 2014 particularly tough. "We have a good routine, but the summer is very busy, even though we aren't actually racing. There are just twelve weeks to turn the course round and do any renovations, plus there are numerous events to look after."

As well as the large centre course area which, as an SSSI, is mown annually for hay, responsibilities include maintaining two rugby pitches leased to Huntingdon Stags, plus those twenty-three acres of car parks.

"We have one of the largest open spaces in the area, so the racecourse is popular for anything from caravan rallies to Pony Club camp," says Sulekha. "The team also looks after the stable yard and ornamental areas, plus we have a number of race meetings for Arab horses, so it really is non-stop." 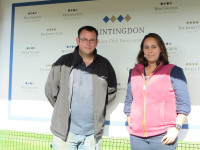 Teamwork and careers in racecourse groundsmanship

As Pitchcare went to press, it was announced that Shaun Reilly is to take up a new role as Head Hroundsman at Chepstow Racecourse. "It's a new challenge and I hope to be able to do some good work at Chepstow and, whilst I have very much enjoyed working at Huntingdon, it's an important step forward in my career," he comments.

Sulekha adds; "We are very pleased for Shaun, but I'm now faced with the difficult task of replacing him - either by recruiting internally or from within Jockey Club Racecourses."

Racecourse groundsmen need special skills, and racecourses invest in training via industry courses and often specialist spraying qualifications. They also need to be able to handle horses on race days, and a head groundsman has to have people management skills too."

She highlights the extra responsibilities at small courses: "As I am also Clerk at Warwick, I'm not at Huntingdon every day, so the routine management is down to the head groundsman. But Gary Stonnell has been at Huntingdon for twenty years, so his knowledge of the course and its particular issues is invaluable - he could do any job. Keith Pike has been here for seven years and works very hard."

Sulekha points out that career paths vary - many groundsmen work their way up at smaller tracks before moving to a job at one of the high profile courses, whereas others prefer to stay in one place.

"There are also opportunities in other sports - many racecourse groundsmen are in the job because they love horses or racing, but the skills are transferable."