by Editor
in Equestrian, Pitchcare News, and Industry News
on 13 Oct 2015

The Racecourse Association (RCA), in association with Pitchcare and Watt Fences, has announced the winning racecourses in each category of the 2015 Racecourse Groundstaff Awards. The annual awards celebrate the hard work and dedication of racecourse groundstaff teams across the country who maintain and develop the racing surface.

Racecourses were judged in three categories, Jump, Flat and Dual Purpose with Huntingdon, York and Sandown Park announced as the winners in their respective categories. One of these racecourse teams will be crowned overall Racecourse Groundstaff Champions for 2015 at RCA Showcase Awards on 12th November.

There was also recognition from the Judging Panel for Michael Simmonds from Salisbury Racecourse, who was awarded the Neil Wyatt Lifetime Achievement Award. Having worked at the Salisbury Racecourse for over forty-nine years, the judges commended Michael on commitment, dedication and unfailingly positive approach to all aspects of his role.

In addition to the categories above, the teams from Perth and Ripon Racecourses were each awarded a discretionary Merit Award by the sponsors Pitchcare and Watt Fences to recognise the manner in which the respective teams had pulled together in response to the challenges to the teams.

Caroline Davies, RCA Racecourse Services Director commented, "The hard work and dedication of the groundstaff teams at racecourses across Britain is exceptional, and the RCA is delighted to recognise this via the Racecourse Groundstaff Awards. We look forward to the announcement of the overall Champion at the RCA Showcase & Awards in November. I would also like to take the opportunity to thank Pitchcare and Watt Fences for their continued support of these awards." 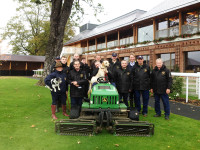 George Noad of the National Trainers Federation stated, "The quality of this year's entries has made it hard to pick winners. However, the awards have gone to groundstaff who have demonstrated a consistently high standard. Their work is very important for the safety of all those involved and they deserve our thanks."

BHA Senior Inspector of Courses Richard Linley said, "Groundsmen around the country have yet again demonstrated unstinting dedication to their work and, whilst it would be wonderful to reward them all for such a great contribution to the industry, there can only be three winners, but it doesn't mean the efforts elsewhere have gone unnoticed."

On behalf of the sponsors, John Richards of Pitchcare added, "The quality of the submissions for the awards improves year on year. It's a clear indication of how highly valued the groundstaff teams are, not only by their own courses, but by the racing fraternity. We had a large number of impressive supporting testimonials from owners, trainers and jockeys. However, this only made it even more difficult for the judges. In my opinion, this has been an outstanding year and all the groundstaff teams, not just the winners, are to be congratulated on their performances."

The RCA Awards are sponsored by Pitchcare and Watt Fences