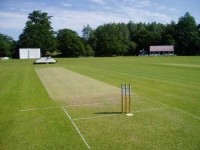 Hursley Park Cricket Club was founded in 1785 and is therefore amongst one of the oldest clubs in the country and plays on the boundaries of Hursley Park Estate.

At the start of the 1900's the Estate boasted two cricket grounds, one for the landed gentry and one for the 'village club', the latter ground sited just inside the Park opposite the primary school.

The other ground was situated approximately half a mile away in an area known as "The Quarters" and, during the 1930's, Sir George Cooper the estate owner, offered this ground to the village club "for the purpose of playing cricket, on the understanding that the ground was maintained and kept tidy". The original village ground at that time was returned to the estate but now is owned by IBM and is being used by them as a sports facility.

Upon the death of Sir George Cooper his nephew, David A H Wilkie Cooper inherited the estate before selling in 1982 to St. Martin's Property Investments Limited. They continued to own the estate until the start of this century when it was sold to the present owner, Mr. Jeff Squire.

No formal agreement was found to be available between the cricket club and the surrounding land owners, but in late 2004, after amicable discussion and negotiation, it was agreed that the club be granted a 99 year lease at one pepper corn rent. In respect of this, the club gained approximately five acres of extra land to extend the Nursery Ground and provide additional car parking. 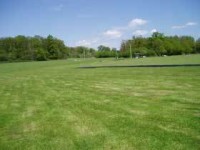 Until the late 1960's, the club had only one team playing once a week at home between June and September - however, this changed in the 1970's.

On the field of play the club had proved successful in the main, due to their exploits in the National Village Championship, reaching the national semi final against Gowerton in 1974 (the first pitch prepared by Chris Westbrook).

Although defeated, the recent commencement of League Cricket in Hampshire around that time gave the club unheard of exposure. Chris Westbrook became captain in 1981, a post he relinquished in 1992 so that he could be selected on merit. During this era the club won the Hampshire Cricket League Championship three times, were runners up four times and reached the final of the National Village Championship at Lords, losing by six runs to Marchwiel in 1984. The club however returned to Lords in 1992 to win the NVC beating Methley and scoring 16 runs in the last over to do so. Chris Westbrook played a full part in the achievement throughout and took four wickets in the final.

As the club's Colts Section was continuing to produce good young cricketers, Chris Westbrook decided to refurbish an area to the side of the main ground that had been previously used for football. A square was cultivated out of the existing grassland, which is on clay soil, and the Nursery Ground, for use by the 3rd XI and juniors, was conceived.

Non-porous net areas and pitches to both grounds have been installed by the club members, with limited grant aid, topped up by money raised from social functions, raffles and fees. Most of the machinery is dated, but this too has been bought through the self-help of members and supporters.

In recent times the club has hosted Cheltenham and Gloucester Cup ties, Hampshire Cricket Board representative fixtures, Southern League and Hampshire League Cup Finals and the facilities were used last September by the ICC as a practice venue for Kenya and England. The ground is also regularly used by the Institute of Groundsmanship for Level One and Level Two courses. 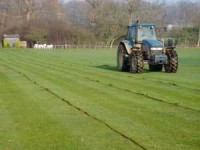 The extension to the Nursery Ground outfield has been the major project in the winter months, coupled with improving the drainage by mole ploughing approximately 60% of the entire area into new and existing main drain trenches filled with perforated pipe and back filled with stone.

Work to the drains, together with the cutting, filling, levelling, and re-seeding associated with extending the playing area have all been completed manually to avoid any surface damage from machinery.

As the ground is low lying and clay based, drainage is a major issue, particularly in the winter months. However the reduction in rainfall during the period proved advantageous in allowing work to continue most weekends. Trevor Paice, a retired player, undertook the challenge last September to change a farmers field into an outfield suitable for cricket by the start of the season - a task he and his helpers achieved and is an area now known affectionately as "Paice's Patch". Although, of course, continued improvement and maintenance will be necessary to bring it up to the standard of the existing outfield, this represents an ongoing improvement to the club facilities and enables the 4th XI to play at home alongside the 1st XI on match days. 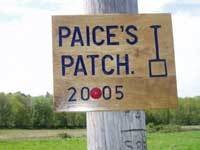 The facilities are wholly maintained by volunteer members of the club, managed by Chris Westbrook.

Good Friday is traditionally the day of the "Club Work Party", and this year thirty players, girlfriends and wives attended to undertake such tasks as cleaning the pavilion, artificial surfaces and sight screens, and included taking up, re-levelling and re-laying one of the artificial surfaces in the net area, turning the carpet through 180° to minimise wear. This season, however, maintaining the surface on the 200 metre long driveway into the ground was not on the 'work schedule', as the Estate kindly offered to complete this chore before the start of the season.

For the first time in six years the outfield had not been waterlogged during the winter and a full pre-season maintenance programme, including rolling, light scarification, cutting and fertilizing were all possible.

Throughout the season the maintenance is shared between ten people, with other members contributing when requested. Each person has a particular role, thus becoming knowledgeable and proficient in the task, familiar with the machinery and taking pride in their efforts reflected in praise from members, supporters and visitors alike. 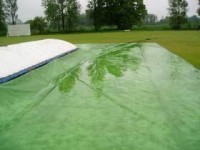 XI lost the first game at home chasing a total of 243-3 and finished two runs behind on 241-4. The only down side is the weather, where in Hampshire rain on Fridays and Saturdays has caused havoc with the League programme and increased the work in the preparation of the ground and particularly in the use of covering.

Currently we are preparing for a game with the Lords Taverners on Sunday 3rd July, hosted by Mr Squire, and the match should prove of benefit both to the charity and ourselves.

The aim for the club is to maintain its position as a designated Hampshire Cricket Board "Focus Club" and continue to improve the standards of the overall facility. The immediate aim, however, is for the 1st XI to maintain its First Division status in the Southern Premier League!

A number of improvements are scheduled - however the programme will be dependent upon finance and, where appropriate, the voluntary labour available.

The Estate intends to provide a new fence to the perimeter of the ground and construct the new car parking area at the end of the current playing season. This will prove an outstanding asset and would not be achievable without their support.

In the short term, continued upgrading of the new outfield will be necessary and it is anticipated that further improvements to the land drainage systems can be undertaken in the next two years.

Refurbishment of the existing two-bay net area, and a reconstruction of the eighteen year old artificial surface on the main ground is also scheduled within this time scale. It is anticipated that, once the finances are available, sufficient experience is available 'in house' to complete both these tasks. 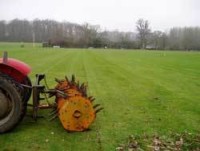 Ideally a separate pavilion for the Nursery Ground would improve the facility and planning permission is being sought for a suitable structure. Again this will be constructed using the expertise available within the club but in order to complete it will require a major financial effort from the membership and friends.

Generally the machinery used for maintaining the facility is old, creating problems with maintenance, repairs and spares. The ongoing exercise will be to improve the machinery, buying new or nearly new, where practical. Top of the "hit" list is a compact tractor, which we consider would have the versatility to enable us to become more mechanized and reduce the time spent on manual operations.

It is vital that we continue to encourage new blood into the "ground maintenance team" and make the work a rewarding and enjoyable experience, and, for the volunteers, a welcome release from the pressures of their main employment.

Hursley Park runs four XI's on Saturday, a Sunday XI and mid-week XI for senior players, with a junior section providing cricket at U9, U11, U13 and U15 age groups.

Adrian Aymes and Chris Tremlett have both progressed through the colts to play for Hampshire County Cricket Club. Aymes, now retired from professional cricket, is back with the club as Captain of the 1st XI.

Chris Westbrook continues his role at Hursley Park, together with a full time career as a Structural Engineer, and he is also the ECB Pitch Advisor and assigned to the Hampshire Cricket Board.