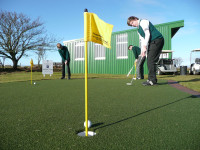 Scotland's amateur golfers are improving their game thanks to a series of all-weather Huxley Golf installations ordered by the Scottish Golf Union for practice facilities across the country.

Coaches at the Scottish Golf Union have hailed the new tournament-quality Huxley greens and tees saying they have enabled longer practice opportunities through the winter and have improved putting statistics.

The installations, funded with help from the R & A, include Huxley all-weather outdoor greens and portable modular putting greens at Nairn Dunbar Golf Club on the Moray Firth and the 24-acre practice facility at Meldrum House near Aberdeen. Other locations include Towerwood Driving Range in Dumfries, Turnhouse Golf Club near Edinburgh and the Mearns Castle Golf Academy at Newton Mearns.

Neil Marr, head professional at Meldrum House and head coach for the SGU's national under-18s boys' squad, said: "Having the relationship with Huxley Golf has been excellent for the players I coach. The Huxley indoor green at Meldrum House enables us to work on various aspects of the players' putting over the course of the winter. I believe that a Huxley Golf green is an essential part of any serious golfer's armoury when living through a winter in Scotland."

Mr Marr said the two Huxley portable modular greens at Meldrum House allowed the elite men's squad to work on their putting at home before they left for what was a successful tour on the South African amateur circuit in early 2011.

David Torrance, PGA professional at Nairn Dunbar, said: "The Huxley outdoor putting green has proved to be a massive asset in our academy winter programme. Prior to its installation, our players were limited in the constructive work that could be done to improve their putting strokes as the normal greens had not recovered from winter work. Huxley Golf have produced a surface which allows the players to work on their putting stroke in the winter at a summer green pace."

In the south of Scotland, Brian Gemmell, PGA professional at Dumfries & Galloway and the SGU's south regional coach, said: "Huxley Golf have produced an all-weather putting green for our members to practise on during the winter and summer which has already seen a benefit with our squad players reporting an improvement in their putting stats. The quality of the ball roll on the green ensures our squad can gain confidence in what they are working on at that time."
Huxley Golf greens use tournament quality artificial grass specially designed and manufactured to enable golfers to practise and hone their short game. The company's all-weather surfaces require minimal maintenance to facilitate golf practice and play all year round.

Based at the Home of Golf in St Andrews, the Scottish Golf Union is the governing body for amateur golf in Scotland incorporating 580 golf clubs across the country representing a total membership of more than 240,000 golf club members.