by Richard Comely
in Machinery & Mechanics, Conservation & Ecology, and Industry News
on 17 Aug 2016

0 Hybrid power - it's here to stay 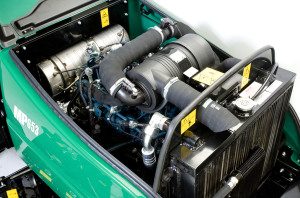 Richard Comely is Director, International Product Development at Ransomes Jacobsen, the Ipswich-based manufacturer of commercial mowing equipment for the golf and local authority sectors. Here he looks at hybrid power systems and how they are used in today's modern turf maintenance equipment

Hybrid vehicles in general are becoming more and more commonplace in the modern world. From a product point of view, car manufacturers are probably the most familiar adopters visible to all of us. You only have to watch TV advertisements, pick up a magazine or newspaper to see how many brands of hybrid car are now available.

If we were asked whether we knew what was driving the adoption of this technology, many of us would probably mention something to do with air pollution and the environment. Indeed, that is the ultimate driver.

Nearly all products with an internal combustion engine now have some kind of exhaust emission legislation governing them. Although sophisticated technology has been developed by the engine manufacturers to reduce the noxious gasses emitted, unsurprisingly, there is a price to pay.

In the small plant and machinery world, of which turf maintenance equipment is an integral part, the cost of the engine contributes significantly to the final price of the machine, especially those requiring Diesel Particulate Filters (DPF) and common rail technology.

Having established the impact a DPF equipped engine has on the cost of the machine, design teams are being driven to look at alternative solutions and technology. This is where many manufacturers of plant and machinery are now introducing or considering hybrid power solutions.

The word 'Hybrid' originates in biology, where it relates to the offspring of two plants or animals of different species or varieties. In the modern vehicular world, it's more usually defined as a vehicle using more than a single power source; in this case, an internal combustion engine and electric power.

So, why hybrid versus some other technology? 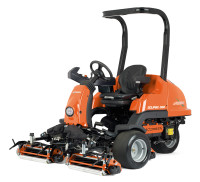 The most immediate attraction to machinery manufacturers is that the power requirement for a given product can be generated from two smaller sources rather than one large one. This offers the opportunity to use a smaller engine, usually diesel in the industrial world, augmented by batteries and electric final drive motors. In our world of turf maintenance, smaller engines (less than 25hp) do not require the sophisticated exhaust after treatment technology such as DPF, so they are excellent for our purposes.

For us, as manufacturers, this simpler type of engine is significantly more economical to buy and, for our customers, it is more economical to run. The combined output, however, can be similar to the horse power of a larger traditional diesel engine driving a hydraulic system.
The need to carry large quantities of hydraulic oil is removed, potential leak points are significantly reduced and lower overall noise levels can be achieved. As electric drives are usually more efficient than hydraulic, the opportunity for fuel savings can usually be realised too. Most of these advantages benefit the end user, environmentally, economically and offer more control in the case of mowers.

For instance, with digital control, Jacobsen were the first to be able to accurately control clip rate (the number of cuts per metre) with their Eclipse series pedestrian and ride on greens mowers. Fuel savings in the region of 30% are achievable. They also removed the hydraulic system completely from the Eclipse ride on, using a small engine to power the generator to run all of the systems on the mower.

Other mower manufacturers are using variations on the hybrid theme, but have retained the hydraulic system to power the traction wheel motors and steering. They use a generator to provide electricity to power the cutting cylinder motors.

There are at least three recognised hybrid architectures known to be effective:

- Parallel: different sources joined at an axis, for instance, an electric bike

- Series: the engine is separated from the drive train; for example diesel-electric trains and the Jacobsen Eclipse mowers

- Series-Parallel: incorporating power-split devices allowing for power paths from the engine to the wheels, which can be either mechanical or electrical such as the Toyota Prius. Recapturing energy from overrun or inertia situations, such as driving downhill, offer yet further efficiency opportunities

In summary, hybrid vehicle technology is here to stay in one form or another. Ever more stringent engine emission legislation will probably accelerate hybrid technology in industrial plant and machinery as it has in the car industry. Hybrid power is now well beyond just being considered a gimmick. It is the future. At Jacobsen we have, and will continue, to embrace it.