0 Hybrid success at The Richmond 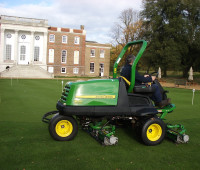 The Richmond Golf Club in Surrey is in the third year of a seven-year equipment replacement plan and its latest acquisition, through a preferred supplier deal with Wokingham based dealer Godfrey's Golf & Turf, is the John Deere 8000 E-Cut fairway mower.

Course manager Les Howkins had been impressed by the 37hp mower, which features five 18in Quick Adjust (QA) cutting units, following a demonstration, and also reports favourable comments from club members. "They really like the appearance of the narrower cut lines on the fairways," he says. "The set-up of the machine also means I can use it for cutting the surrounds and approaches and around bunkers, if required."

The 8000E's hybrid diesel/electric design produces less engine noise and fewer emissions, and needs less fuel. Les Howkins was convinced to add one to his fleet by the potential fuel cost savings and what the machine could do to enhance the look of the fairways on the 18-hole, 6000-yard course, next to Richmond Park.

"The three-wheel set-up, smooth tyres and the lower risk of hydraulic oil leaks from the hybrid design all added up to a dream machine for the fairways, and so it has proved," he says. "I favour the diamond pattern of cutting the fairways here - turns with this mower are a lot less harsh, and with the reduced impact their appearance is noticeably crisper. The 8000E does the job just as quickly as a wider machine, because we've found the turning plus the lifting and dropping of the reels much more efficient."

Les Howkins manages a team of 10 fully qualified greenkeepers, and says they have also found the new mower a pleasure to use. All give the thumbs up to John Deere's uniform mower controls, which makes switching from one cutting job to another much easier.

This is one reason why the club's equipment replacement plan is "going down the John Deere route", as Les puts it, and a second 8000E mower was ordered from Godfreys Golf & Turf due to the success of the first machine. "This latest purchase will complete my fairway mowing fleet and ensure consistency of appearance, quality of finish and maintenance in the workshop," he adds.