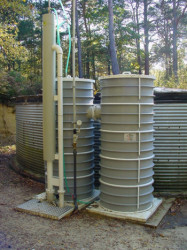 Iron deposits in the sub-strata can be found across large swaths of the country and for golf clubs in affected areas this can create considerable problems when irrigation water is being extracted via a borehole. Discolouration of turf and ancillary equipment is visually apparent and unsightly but, more importantly, the high level of iron content can lead to the establishment of an iron pan in the soil, blocking pore spaces and impeding drainage.

Golf course irrigation systems can also be severely affected with choked-up sprinkler heads and valves plus, over a period of time, a build-up of iron deposits within the underground pipework will severely reduce the internal pipe diameter, leading to costly repairs and, in some cases, complete system renewal.
.
Having obtained a license to extract 150 cubic metres of irrigation water per day from a borehole, The Berkshire Golf Club became aware their location might well be one affected by the 'iron problem'. Tests confirmed this was the case, with the groundwater containing 5.0 mg/l of iron.

Course Manager, Chris Lomas, approached a number of companies and organisations for their advice, amongst those being the Ringwood based amenity water treatment specialist, Hydroscape Ltd.

At that time the company didn't have a suitable system within their product portfolio but were sufficiently intrigued by the problem to begin their own research. This research eventually led them to Belarus where they found a Ukrainian developed system being used to provide virtually iron free borehole extracted water for the production of an internationally branded cola drink. To Peter Roberts, Hydroscape's MD, there appeared to be a very simple and logical extension to this; what's good enough for human consumption should certainly be more than adequate for golf course irrigation. So following a visit to Belarus and armed with extensive data he put this proposition to the club who, subject to certain guarantees, decided this could be the way forward.

The system has been installed alongside two existing water storage tanks, providing iron extraction between them and the borehole source. Testing after two months indicated that the iron content had been reduced to 0.1 mg/l - three times lower than the drinking water

standard of 0.3 mg/l, so the irrigation water is now three times cleaner than drinking water and will continue to improve. A welcome additional benefit has been in the reduction of water pH levels. Previous tests indicated water was being delivered at a pH of 7.0 however, after treatment, this level has been reduced to a pH of 5.0. Chris Lomas believes that irrigating with this reduced pH water will benefit the more acidic loving Fescue and Bent grass species and reduce the possibility of alkaline based diseases such as 'take all patch'.

The Hydroscape Iron Removal System is a non-chemical system, and, therefore, totally environmentally friendly. The secret to the system's efficiency lies in its unique design, where four separate types of treatment and iron removal automatically take place, with all stages of the treatment process being based on simple and reliable principles of water levels and gravity.

The system was also designed for use in harsh environments encountered within the countries of the former Soviet Union and, in many cases, in locations with limited or difficult transport links, so its construction is extremely robust with no moving parts, requiring only the minimum of maintenance.

Operational data from both the cola production plant and other sources in the Ukraine, where the system is used extensively for drinking water production, indicates an almost zero failure rate, due to the absence of mechanical or electrical devices.

Chris Lomas at The Berkshire comments favourably on the system's performance so far, referring especially to the output of 150m3 per day to meet his requirements. He is also confident this output can be increased, if needs be.

As a guide, areas affected with high concentrations of iron within ground water include a broad band running through Yorkshire down through East Anglia and Essex, which then extends into London and the South Downs. The North West, North Wales, and Scotland can also be affected. Hydroscape's Iron Removal System, will, therefore, be of considerable interest to clubs located within those areas that are currently extracting, or planning to extract, irrigation water from a borehole source.