0 Hydroseeding - what is it? 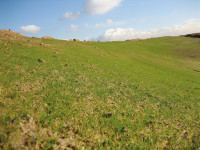 In simple terms, hydroseeding is the process of spraying a mix of water, seed, mulch, fertiliser and binder onto substrates varying from rock faces to flat topsoil areas.

It is used primarily where conventional seeding cannot be undertaken because either the area is too rough or too steep.

It can be used to establish grasses, wildflowers, shrubs and trees directly onto subsoil, poor quality soils, demolition rubble, quarrying and mining waste and, indeed, topsoil. The hydroseeded layer effectively replaces the soil and, on steep slopes additionally, provides an element of erosion protection with the binder sticking the surface materials together to form a crust.

The equipment used is basically a water tank on wheels, either towed or lorry-mounted, with some means of mixing the materials and a pump to spray out the resulting mixture.

Although essentially a simple process, there are a number of things that must be taken into consideration when assessing the suitability of a site for hydroseeding.

1) Soil: This must be tested for pH - is it acid or alkaline? This will have a significant effect on which plants will grow. Does it erode easily? If so, then you should select species which will grow quickly to help bind the surface. If not, then you can select from a wider range of species and can look at wildflowers, which germinate and grow much more slowly than grasses. Is it fertile, i.e. does it contain essential nutrients or will these need to be added in the hydroseeding process?

2) Site: What is the surrounding vegetation? Ideally, you would want any new seeding to blend in with the surroundings. How steep is the slope? Again, if it is steep, then you would want to seed it with a mix that will grow relatively fast. In which direction does it face? A north facing slope will get less direct sun and, consequently, hold moisture longer than a south facing slope. However, it will also receive less sunlight, particularly in the winter, which may have an effect if you are selecting wildflower species.

What is the access for equipment? If you cannot directly access the site either from the top or the bottom of the slope, then you may need to attach hoses to the machine which will consequently involve a longer time span to complete the works.

What is the access to water? Again, if not directly available from a nearby water source, then this may require travelling some distance from the seeding area, thereby incurring extra cost.

3) Climate: Does the site suffer from extremes of rainfall? This will have an effect on whether or not the soil will erode. What is the length of growing season? The further north the shorter the season. Is the site near the coast? The salt in the air can have an effect on the species that will survive.

4) Client: The client may have a particular requirement for the site. Whatever his wishes, this has to be balanced with the site restrictions. For example, on a steep slope that may be subject to erosion, the client may wish to see wildflowers. However, because these are slow growing, the slope may be eroded away before they get a chance to establish.

5) Seed: This can be grass, wildflowers, trees and/or shrubs. The best people to advise on specific mixtures are generally locally based seed merchants, who should have both the knowledge and whether they are commercially available.

Once you have considered the above, then the hydroseeding mix itself can be specified using the following ingredients:

The amount of materials to be placed into the machine will mainly depend on the size of the machine. The simplest method of calculating this is to measure out an area of, say, 1000m², mix the ingredients to cover that area (i.e. seed at 25g/m² then use 25kg, mulch at 100g/m² then use 100kg etc.) and then spray onto the measured area to give an even coverage. 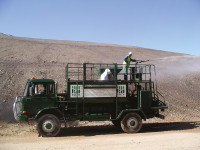 In general, if water is running off, then too much is being applied, if not enough then the coverage will look patchy. The experienced operator will soon know what area his machine will cover with one tank-load.

Before hydroseeding, the site should be free of weeds, which will stop the mixture getting onto the soil, and free of excessive compaction, which will prevent the roots penetrating the soil. It should also not be too smooth, i.e. pushed down with the back of an excavator bucket, as this again tends to form a barrier against roots and also makes it harder for the water in the hydroseeding mix to soak into the soil.

Once mixed, the hydroseeding mixture is sprayed onto the soil, either directly from the machine or by the use of hoses attached to the machine, allowing access into more difficult areas.

For soils that may erode very easily, the soil can be covered with a biodegradable geotextile, such as jute-fibre matting, which gives much greater protection than just hydroseeding alone. These mats can then be hydroseeded in the normal way and, when the grass grows, it binds with the mat to give excellent soil protection.

In summary, hydroseeding is not a 'magic' answer to get grass growing anywhere, nor does it make grass grow quicker; it essentially allows greater flexibility in any seeding operation.