Stuart Griffiths, head greenkeeper at Pitlochry and Blair Atholl Golf Clubs, is still recovering after breaking his pelvis and coccyx when the machine he was working on plummeted down a steep embankment and pinned him under it. 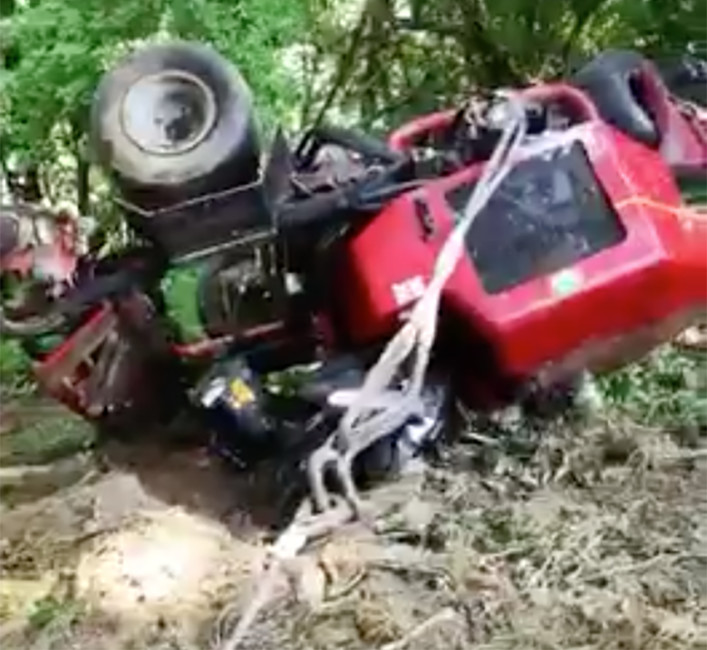 The aftermath of the accident

Stuart told how he thought of his wife and kids as he lay crushed beneath a massive mower for nearly two hours on a Scots golf course.

He is still recovering after breaking his pelvis and coccyx when the machine plummeted down a steep embankment and pinned him under it.

The 44-year-old, who is the head greenkeeper at Pitlochry and Blair Atholl golf courses, had been tending his beloved tees when it fell down the steep hill and crushed his legs underneath prompting an emergency response.

A well-placed fence post stopped the machine entirely crushing him and fire engines and an air ambulance had to be drafted into the dramatic nearly two-hour rescue in June.

Stuart told the Record: "The golf was just starting up again, I had worked all through furlough, and I was working with the machine.

"I still don't know how it happened. I got near the edge of an embankment and it just fell from me. It was crushing my legs, shoulder and the bottom half of my body. It was in a very precarious position about 1.5metres from the edge of a steep hill."

"But luckily a fence post was stopping the heavier part of it going on my head. I never in my life thought I would be in that position and hopefully I never am again. I am very lucky."

Stuart then phoned his pal Greg Carruthers, a director at the course but also a retained firefighter from the nearby station.

He said: "I usually keep my phone in my right pocket but luckily that day it was in my left so I could reach it and phone."

"Within five minutes he had arrived and was there keeping me calm. I don't know why I thought to phone him when most people would have rang 999."

"The fire brigade came and looked but the medical staff couldn't get near me so I wasn't allowed any pain relief. It was very painful and it felt like it was getting heavier but I was trying to keep focussed."

"I was thinking of my wife Gillian and two daughters and my work and what could happen. I'm a relatively calm person but you do think about a lot when you are there for one hour and 45 minutes."

The Fire Brigade managed to hoist the machine 'inches' from the ground and Stuart was eased out before he was airlifted to Ninewells hospital in Dundee after the early morning incident on June 25th.

Stuart is now recovering with physiotherapy after undergoing operations and having pins and plates inserted into his pelvis.

The keen golfer hopes to return to work as soon as possible.

He added: "I'm lucky to have a job I absolutely love and have been doing since I was 17. If I could go back tomorrow I would. But we need to see how this goes. I would be looking to go back at some level next month."

As a special thanks to his rescuers, Stuart has organised a charity Four Ball raffle to raise funds for Scotland's Charity Air Ambulance.