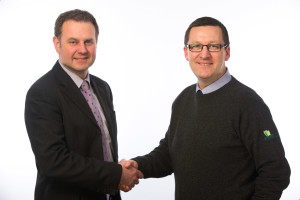 Everris has continued to strengthen its Turf & Amenity team with the appointment of Ian Lacy as Technical Area Sales Manager for parts of London and South East England.

Ian joins the company from the Institute of Groundsmanship (IOG), where he spent six years making a significant contribution to the development of education and training for ground care professionals.

When, as a teenager, a serious ankle injury put pay to a promising career in professional football, Ian took to playing golf at his local club to aid his rehabilitation.

Watching the greenkeeping staff tend to the course each morning stirred a curiosity about the turf care profession, and after several months of helping them voluntarily, he secured a full-time position.

Ian later made the transition from golf greenkeeping to football and cricket groundsmanship where he became an active member of the IOG in his local area, and a groundsman trainer on the institute's behalf. He then moved into sportsturf lecturing, becoming Head of Horticulture at East Durham & Houghall College, before relocating to Milton Keynes with his family to take up the role of Head of Professional Services at the IOG.

Speaking about his new role, Ian said: "I'm delighted to be joining Everris, who in my opinion are the world leader in nutrition for sports and amenity turf, as well as in horticulture. The products speak for themselves, and I was fortunate as a practicing greenkeeper and groundsman to have used the products with great results. I'm really looking forward to getting out there and working with a great team."

Richard Walton, Business Manager for the UK & Ireland commented: "We're delighted that Ian has joined our team. I know our customers will benefit from the years of practical experience he brings to his new role. Ian's also a 'people person' and his passion for the industry, and those who work in it, shines through."

Everris is part of the ICL Group. The company supplies a wide range of professional fertilizers, plant protection products, grass seed blends and specialised products to turf managers around the world through a network of distributors.