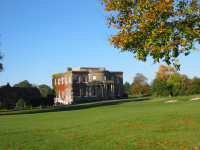 There are not many golf clubs that can claim that their course record has remained unbeaten for nearly 37 years, especially with all the recent advances in golf equipment technology allegedly making the game easier to play. But Brocton Hall in Staffordshire is one such club. It currently stands at 65, and that was achieved by K. H Hodgkinson in 1969.

Brocton Hall also boasts the ghost of a lady who roams the main driveway, probably greeting members! She is believed to be one of the servants of the hall who died in unknown circumstances. She has been seen on several occasions by Joe Banner, one of the current greenkeeping staff. And no, he hadn't been drinking!

The course was officially opened on July 12th 1923 and was the result of a break away of members from two nearby clubs, Staffordshire and Cannock Chase, who had become dissatisfied with their courses. A large fire at Cannock Chase that destroyed the clubhouse finally instigated the move to Brocton Hall

In 1920 the hall and its grounds, under a mile away from the Cannock Chase course, was put on the market where it failed to reach its reserve of £5,900, and remained unsold. The Cannock Chase committee commissioned Harry Vardon (five times Major champion) to examine the site to see if it would be suitable as a golf course.

In May 1922 Harry Vardon submitted his report declaring that it was "eminently suitable for an 18 hole golf course" and that "the cost should not exceed £150 per hole". The decision was made, the finance promised and Brocton Hall estate was purchased in September 1922 for £5,550. In January 1923 The Cannock Chase Golf Club was reconstituted as The Brocton Hall Golf Club.

The course construction took less than six months; a tremendous feat in those days considering most of the work was done by hand.

Most of the earth moving was completed by wheelbarrows loaded into horse drawn carts. Bunkers were dug by hand and filled with sand from nearby Mitford Common. The soil greens were also formed by hand and laid with Cumberland turf.

The course was officially opened by the Fourth Earl of Lichfield and followed by an exhibition match between Harry Vardon and Ted Ray, the winner of the 1912 British Open at Muirfield.

When the hall was acquired it was a three storey building that had seen better days. There was no electricity and no heating. It was quickly converted into a comfortable club house with accommodation on the top two floors; the first floor for the resident secretary and lady visitors; the top floor was converted into a 'dormy' house for visiting groups. Up to thirty visitors could be catered for and it provided valuable income for the club up to start of the Second World War.

In October 1939 plumbers repairing the lead guttering accidentally started a fire that destroyed the top storey and damaged other areas. It was impracticable to rebuild in wartime and the building was repaired to leave the two storey building we see today.

The first Head Greenkeeper was S. J. Miles and he was appointed in January 1931. He was paid £3per week plus accommodation. By 1937 the club employed five greens staff; the same number they employ today.

The club has recently appointed a new Course Manager, the very experienced Ian Somerville MSc. Ian has worked at several courses in the UK, including the Royal Liverpool Golf Links at Hoylake where he worked as assistant to the late Derek Green.

His career path to Course Manager has seen him achieve a number of qualifications including an MSc in Sports Surface Technology from Cranfield University. Not content with that, he is hoping to take a PhD if he can find sponsorship. He is a great believer in education and has already started two of his newest members of staff on NVQ courses at Rodbaston College in Staffordshire. He aims to get all of his current staff qualified to at least NVQ Level 2/3 over the next five years leading to HNC, HND and even MSc where applicable.

He believes that, as more European funding becomes available to UK Colleges and Universities, we will see an influx of overseas turfcare professionals in the next five to ten years. Therefore, it is imperative that UK clubs invest in the future of their own staff.

Ian has inherited an experienced workforce. His assistant, Andy Fellows, has 14 years service, Greenkeeper Richard Quine has been at the club for 17 years and Joe Banner has been with the club since 1969. Joe, who officially retired last year, now helps out on a part time basis. Lee Wood has been with the club two years and is one of the new team undertaking NVQ. The newest member of the team is Alan Merricks who has been with the club approximately 4 months. He will start his NVQ in September 2007. There is also a full time qualified mechanic, Gary Davies, who carries out all the servicing and repair work.

Ian's first objectives is to get to know the course and monitor how it performs before bringing in his own style of management and maintenance regimes.

The existing maintenance regime involves greens and approaches being cut daily, tees four times a week, semi rough twice and the main rough on rotation. Fairways are cut 2/3 times per week depending on condition and needs of the course.

Tee markers are moved daily and renovated (divoted) daily with fresh topdressing and seed. Bunkers are raked every day.

The greens at Brocton are quite small so Ian ensures they are inspected and the holes changed at least three times a week and for every competition.

Granular fertiliser treatments are programmed in for the greens for spring and autumn periods, plus a few supplemental liquid feeds (seaweed extracts) as and when necessary. The fairways usually get a mid season liquid feed to keep them going.

A blanket application of wetting agents are applied to all greens, approaches and tees three times per year, followed by some localised spot treatments on some of the worst areas.

Herbicides and pesticides are only used as a last resort, allowing for good cultural practices to control the majority of pests and diseases found on the course. Greens are brushed and swished daily to reduce leaf moisture, clean up worm casts and generally keep the surfaces clear of debris.

The course is predominantly built on clay loam soils. Therefore, aeration is key over the coming months, with a programme planned for the greens, tees, approaches and fairways. This will involve hollow coring, spiking, vertidraining, sarrel rolling and, where necessary, some deeper penetration.

Different tine sizes and depths will be used so as not to form a pan at any one depth. This will help open up the fissures within the soil allowing air, water and nutrients into it which, in turn, will increase root mass and open up the profile

An intensive programme of hollow coring is undertaken on the greens, tees and approaches in the Autumn followed by a top dressing regime of applying an 80/ 20 organic mix of materials.

The greens receive additional aeration in the form of some solid tine spiking using the vertidrain (12mm x 300mm tines @50mm spacings plus a 70 degree heave).

The greens at Brocton Hall leach quite quickly so the aeration will assist the uptake of nutrients from the available moisture content of the profile. The long term benefit is that the grass sward will be stronger, more consistent, and with a higher drought tolerance leading to a truer playing surface. 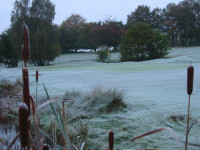 As for winter work it will mainly involve many of the traditional jobs that are required on the course, tree and woodland management, clearing out ponds and ditches and some localised renovation work to heavily worn traffic and pathway areas.

One aspect of course management that Ian is keen on is conservation. He intends to alter the mowing regimes to affect a better climate for the local flora and fauna. This will be done with the backing of the club committee. So far they are in agreement with all Ian's proposals for improving the course for the benefit of their members and visitors.

The future of the course looks to be in good hands; even the resident ghost may approve.