The notion of coated seed is nothing new. It has been with us for some time now and is widely available from suppliers and producers.

What is new, however, is the efficacy of coated seed. For the first time in the turfcare sector, a product has emerged that stands up to the scrutiny of both independent testing and the end user.

Advanta's Headstart and Growmax, Rigby Taylor's ESP, and Turfguard from DLF Trifolium are among those long familiar to seed specifiers. With the exception of Turfguard, which is seed coated with a biological inoculant, virtually all coated seed incorporates seaweed extracts, which offer some benefits for the seed when it is growing in nutritionally poor substrates such as sand. Typically, such coated seeds may contain less than 1% fertiliser.

End users are telling us that iSeed® presents a massive leap forward for our industry. It combines a full strength 20%N controlled release feed (more go in it than most fertilisers on their own) with top seed genetics in a fully targeted way.

By feeding the seed, it allows new seedlings to establish in competitive swards without feeding the surrounding established weed grasses. This is undeniably a first in the industry.

iSeed has been developed to help end users deliver more sustainable solutions to their turfcare programmes by reducing input of pesticides, fertilisers and water.

And current best practice in overseeding is acknowledged to rely on a combination of less fertiliser, use of a growth regulator such as PrimoMaxx, sand slitting/injection with a Graden followed by sowing. Within this environment, iSeed can deliver significantly improved take-up to boost the efficiency of the process.

It has taken several years of collaboration between DLF Trifolium and the Yara fertiliser company, an international leader in its field, to develop the product, with the aim of combining optimum grass seed genetics with all the nutrients needed by a seedling in a single coating. The result is to improve establishment of the plant but also to reduce inputs. 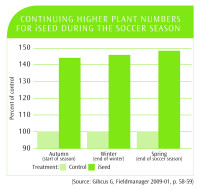 Only after extensive trials in the laboratory, the greenhouse and by end users has iSeed been developed, then successfully tested in user trials across Europe.

In the words of the STRI, which conducted trials on iSeed in 2007: "The treatment significantly affected establishment and growth, improving the rate of both."
Independent tests also conclude that take-up of iSeed is four times greater than using broadcast fertiliser.

The golf sector, especially, is set to benefit. In winter, customers are reporting up to a third more new plants growing, all with greater root and shoot strength. Wear tolerance and ground cover is significantly increased also, they say.

DLF Trifolium is rolling out iSeed® across the sporting spectrum. The Ji Tee, and Ji Fairway (the latter including Manet hard fescue) mixtures are now available to serve the golf market.

The quantity of iSeed® ordered since its launch at Harrogate Week in January, offers us proof of the benefits that end users perceive in adopting it within their turfcare programmes. Time will tell how they fair, but DLF will be closely monitoring their progress as the first sowings come into play across the UK's sportsturf.