The idea came about from a meeting between Paul Moreton, BSH Technical Sales Adviser, and some of the 'Gingers'.

Paul thought it would be a good idea to invite the Gingers, along with some of the members of the newly formed Midlands group, to visit IBERS (Institute of Biological, Environmental and Rural Studies) to see how grass seed varieties are brought to market.

The day began with an introduction from BSH's Richard Brown who explained how the company became involved in the grass breeding programmes at IBERS.

British Seed Houses is the largest privately-owned grass seed company in the United Kingdom, providing a comprehensive seed service to the amenity market through two strategically placed units at Lincoln and Bristol.

IBERS is the UK's major centre for independent research into improving the efficiency, potential and sustainability of grassland. Their remit includes research aimed at understanding the physiological mechanisms involved in grass plant nutrition, quality and stress resistances.

BSH has funded the amenity turfgrass development programme since 1987, working together to form the UK's largest grass breeding programme. It has already produced some outstanding performance cultivars, which are supplied throughout the UK and other EU countries. 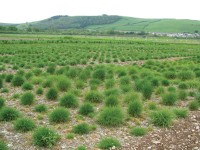 The institute employs 350 staff, has an annual turnover of £25 million and represents the largest land-based science department in the UK.

Richard then went on to introduce two of the IBERS staff, grass breeders Sheena Duller and Ian Thomas, who have, for many years, been involved in developing and overseeing the successful grass breeding trials.

Sheena began by giving an interesting talk on her role at IBERS, the history of the research department and the work she has been involved with in bring several grasses species to market.

She explained how grasses are selected for trial and grown to produce further material for ongoing trials, monitoring the swards performance in relation to plant health, vigour, colour, growth, habit and stability.

The institute has spent years collecting plant material for trials, travelling all over the world to find suitable material, that may have the traits they want to breed in to new grass varieties, for example, salt, drought or shade tolerant. To find these grasses the plant collector need to travel and find locations and environments that induce grasses to survive in these conditions.

Over the years IBERS plant collector and breeder, Ian Thomas, has done just that, he has spent years travelling the globe collecting material. His work, along with that of other colleagues, has resulted in a plant collection of over 25,000 original plant types that are stored in a seed bank on site.

Seed is produced from the parent plant material and harvested, put into special sealed bags and stored in a refrigerator at -18OC. This ensures material can be stored indefinitely. Ian records his collection and shares the information with other plant breeding organisations. 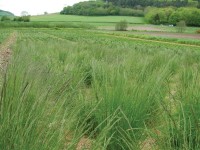 With the formalities over, the 'Gingers' were shown around the extensive site, first seeing Ian's seed storage facilities and how he goes about labelling and storing the parent material.

Next, how the seed was cleaned and bagged to produce more seed for further trials. Sheena then took the group out to the trial plots, which were of great interest to the 'Gingers', allowing them to see original plant material reacting to some greenkeping practices such as mowing and feeding regimes.

It was interesting to note how these different grasses stood up to the trials, with some dying back, some with disease, while others showed different growth habits and colour. Visual appearance and sward density were dominant indicators that were noticed by the visiting greenkeepers and provided a good talking point.

Sheena monitors these initial trials and would then select a given sample material to go on to the next stage. A number of plants are potted up and placed in green houses to monitor vigour, shape and other traits. If this is successful they go onto the next stage.

Eventually, enough plants are grown to produce 2kg of seed, so that there's enough seed material to produce plants for the next series of trials.

Some will go to the STRI, where a more rigorous testing process and scoring of the material will take place. If successful, the plant will then be sown for full seed production. In essence, all this work takes time and often results in seven to twelve years of investment and time, before a single gramme of seed is sold.

And was the trip a success?

"Very worthwhile," said Paul Mills from Penn Golf Club. "We got to see first hand the painstaking processes that go into producing a product, from the breeding of a cultivar through to the production on a large scale. It makes you appreciate a little more why the cost of seed is what it is."

Robert Jones, Head Greenkeeper at Enville Golf Course agreed. "It was great to understand the long process and studies it takes just to get the seed to market, that side was very interesting. I still find it hard to understand that, with all the evidence regarding cutting heights/high inputs and the effect its has on the finer grasses, we are still finding ourselves arguing the point to fellow professionals. I think more trips like this, and better education, are desperately needed for younger greenkeepers."