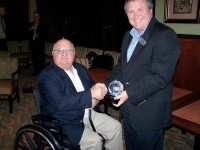 On February 1, 2008 the International Golf Course Equipment Managers Association (IGCEMA) announced its first annual winner of the Edwin Budding award (sponsored by Ransomes/Jacobsen) at Grande Pines Golf Club in Orlando, Florida. The winner was selected by a committee of industry professionals selected by the IGCEMA.

Mr. David Withers, Managing Director of Ransomes/Jacobsen located in Ipswich, UK announced Mr. Ed Combest, retired professor from Lake City Community College in Lake City, Florida, as this year's winner. Mr. John Piersol, Director of Golf/Landscape/Forestry at LCCC, spoke on Ed's dedication to the profession and his being one of those responsible for the success of the Turf Equipment Technology program at Lake City. "Ed's organization, professionalism, and vision put Lake City on the map", said Piersol.

The IGCEMA would like to congratulate Ed Combest as our 2007 Edwin Budding Award winner and thank all of our finalists for their contributions to our industry. The 2008 award will be given away at next year's Harrogate Week (in the UK), hosted by the British International Golf Greens keepers Association (BIGGA). 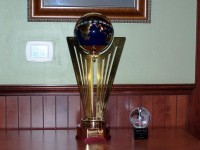 The Edwin Budding Award was created to award those in the turf equipment industry whose actions have gone above and beyond the norm to help shape our industry into what it is today. Edwin Budding was one of those individuals who helped define golf, not as a player, but as an engineer. He designed the first reel mower, which has shaped golf as we know it today. Imagine golf today without the invention of the reel mower. Where would golf be?

The IGCEMA wanted to recognize individuals that demonstrate the same qualities Mr. Budding did; influence significant change in our industry above and beyond normal day to day work. Many awards are given away today which are not judged on contributions but more towards how big the club name is, how big your resume is, or how well you can write. The IGCEMA has created an award for actual, measurable accomplishments, to make an accurate judgment of contributions made to the industry, and reward those contributions.