Dutch agricultural and groundcare machinery manufacturer Imants B.V. marked its 125th anniversary by hosting a weekend of celebrations at its factory in the village of Reusel, which has been its base since its inception in 1885.

Owners Felix Peters and Hans de Kort and their 35 employees welcomed more than 3,000 guests over the two days, beginning with an evening of live music and entertainment that culminated in a spectacular firework display.

The following day, visitors and their families were able to tour the workshops, see the impressive range of machinery produced by the company today and, in contrast, also watch some of its earliest pieces of equipment at work, including the reversible plough pulled by two magnificent Brabant horses. Transport was also laid on to the village museum, whose main exhibit was dedicated to retelling the company's history and charting developments in agriculture in the Netherlands though displays of archived documents, photographs, technical drawings and machinery.

Imants was founded by Reusel's blacksmith, Jan Imants, who began making hand tools for local farmers. He went on to produce horse-drawn ploughs and became respected in the agricultural community for the quality of his workmanship. The company's commitment to superior build quality has endured and today it is renowned worldwide for the development and manufacturing of advanced agricultural machinery, particularly its deep spaders and central drive rotovators. 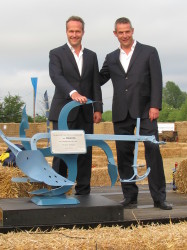 In recent years, Imants has also become a major player in the European turf care machinery market with the successful introduction of its range of aerators and decompactors including the Shockwave and Rotoknife. In 2009, it completed the takeover of Koro-Systems, which resulted in the revolutionary Field TopMaker and other specialist turf renovation equipment designed by Ko Rodenburg being marketed under the new name, 'Koro by Imants'. Both the Imants and Koro by Imants ranges are sold exclusively throughout Europe, Africa and Asia by leading groundcare machinery supplier, Campey Turf Care Systems.

Richard Campey paid tribute to the company's achievements and to the owners who continue to drive the business forward: "Imants' longevity and success can be put down to a number of factors. Innovation and quality, the vital elements in any successful manufacturing business, remain their primary focus. A machine needs to do a job and do it well but instead of waiting for techniques to evolve before providing solutions to problems, their engineers have continually developed each piece of machinery to ensure that they continue to meet the demands of end users."

"Felix and Hans have forged a superb partnership which has introduced the Imants name and products to the worldwide market place and we're pleased to be working alongside them in the turf care sector. Our mutual desire to deliver innovative, well built, high work-rate machinery should enable us to build upon our success in the years to come."

(Top) Imants has become a major player in the European turf care machinery market with the successful introduction of its range of aerators and decompactors including the Rotoknife.