by Charmian Robson
in Industry News
on 12 Feb 2015

The Imants Rotoknife from Campey Turf Care Systems is proving an effective weapon in the fight against Chafer Grubs. 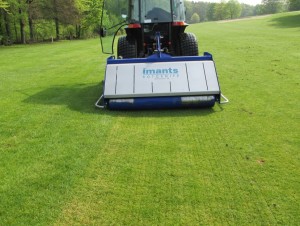 2014 proved an excellent year for the Chafer grub and consequently a particularly bad year for the turf professional responsible for managing the grass.

Peter Wisbey is an independent greenkeeping Consultant with over 48 years of hands-on experience in the golf industry, here in the UK and across Europe. The problem of Chafer grubs is not a new one and the usual approach is to consider the application of insecticides. However this option is becoming increasingly difficult to justify and an alternative sustainable solution is needed.

"The first indication that there is a problem is usually damage from foraging birds and mammals eager to reach the chafer larvae lurking in the soil." explains Peter

"Insecticides that will control Chafer larvae are few, and in mainland Europe are almost non-existent. So while I was working with a golf course in Northern Germany it became apparent that we needed to 'think outside the box' and come up with a way to deal with these damaging pests."

After studying data Peter established that the grubs are closest to the surface between August and October. "The Club suggested shooting the crows;" joked Peter "But as I explained this was addressing the effect and not the cause. The larvae feed on the grass roots; sometimes to such an extent that large areas of turf can be rolled up like a carpet and the larvae will be found just below the interface."

What was needed was a machine that could crush the larvae during those months when they were closest to the surface.

The answer came in the form of the Imants Rotoknife.

In 2011 Windlesham golf club in Surrey had consulted Peter and had purchased an Imants Rotoknife as the perfect unit to carry out the increased aeration programme that he had recommended.

"It occurred to me that this piece of equipment could be just what we needed in Germany to help with the Chafer problem," said Peter.

The Imants Rotoknife is not only solid but is also fitted with two sets of blades that penetrate at different depths and spacing's.

A machine was duly purchased and put to work on the worst effected fairway. The smaller blades were used and set at 5cm spacing and at a similar depth of penetration. Passes in three different directions were taken to achieve as much cover as possible.

The result was remarkable. The combination of weight and sharp blades had the desired effect killing the bugs just below the surface. It would appear that birds listen to the activity of the bugs to locate them under the surface. Dead bugs hold no appeal!
Within one day damage from birds ceased.

So the Imants Rotoknife is not only an effective aeration machine for regular aeration on greens, tees and fairways it is also an excellent, environmentally friendly tool in the war on Chafer grubs!