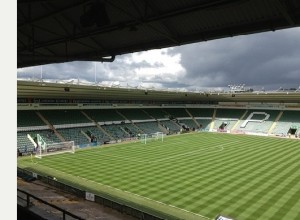 Argyle manager John Sheridan has congratulated head groundsman Matt Frost on the 'immaculate' condition of the pitch at Home Park.

The relentless rain this winter has led to the postponement of many matches in the Football League, but the Pilgrims have avoided any such problems.

There are no concerns over the game against York City tomorrow, despite another week of fierce storms battering the south-west of England.

The pitch was re-laid at a cost of £500,000 in the summer of 2010, shortly before the club hit financial hard times, and it can cope with repeated heavy rainfall.

Sheridan believes it must be the best in League Two, and paid tribute to Frost and the rest of the groundstaff for that.

He told Herald Sport: "Our pitch is unbelievable. It's frightening how good it is.

"Full credit to the groundsman for looking after it. It's immaculate.

"I think the only danger we would ever have (of a postponement) is with the wind and the safety of fans getting to a game. The pitch is beautiful."

The wet weather has taken its toll on the Harper's Park training ground, but Argyle have still been able to use that a couple of times this week.

They also have the artificial surface at Salt Mill, across the Tamar in Saltash, at their disposal if necessary.

Sheridan said: "We have used the training ground a couple of times this week.

"It's not ideal, but sometimes it can benefit you. You go on a mudheap, and conditions you are not used to, and then you go on our pitch and you appreciate how good it is.

"That's the way I look at it. I don't make excuses. We just do the best we can - whether we are in a gym, on astroturf or on a muddy pitch."

He added: "We have had a good few days (of training) so we will be okay for Saturday."

Argyle are in 10th position in league Two after losing only one of their last nine games - which was a 3-0 defeat away to Rochdale on January 18.

York will arrive at Home Park in 14th place, three points behind the Pilgrims but having played two more matches than them.

The match will see a reunion between Sheridan and his former Sheffield Wednesday team-mate Nigel Worthington, who is now the boss of York.

The Minstermen showed what they were capable of when winning 2-1 away to promotion-chasing Fleetwood Town in their last away game.

Sheridan said: "York have played a couple of games more than most teams but they are having a decent season.

"We have had them watched and they played very well at Fleetwood. They got a really good result there as well.

"I know Nigel very well because I played with him for a long time at Sheffield Wednesday.

"He's an experienced manager and he's probably saying the same thing to his team that I'm saying to mine - 'if you get can a few wins quickly, you can find yourselves in a healthy position'.

"They are very workmanlike and have got one or two decent players so I'm expecting a tough game."