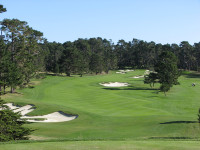 The Role of the Bunker in Golf Course Design.

From the early days of golf, the sand bunker has been one of the defining hazards which the golfer has had to avoid in order to reach the green. On the early links courses, the first bunkers emerged in areas of exposed sand to form an interesting and penalizing hazard.

The severity of the bunker affected the playability of the ball - giving the bunker a significant function and role in the strategy of the golf hole. The early links bunkers, as we see them on the British links, were later on formalized and given a stabilising, revetted edge. Since the end of the 1800s many types of bunkers have emerged - from small sand traps to gigantic 'American' style bunkers.

From an architectural point of view, the bunkers serve many purposes; they help dictate the strategy of the golf holes, they provide character and are of immense aesthetic value. In fact, the whole look and feel of the golf course changes so dramatically depending on what style of bunkering that is chosen, that the bunkers might be considered the key design feature on most golf course.

It is important to keep this in mind when planning changes to bunkers on existing courses - it is not just the look of the individual bunker that changes - it is the playability and entire visual character of the golf course. 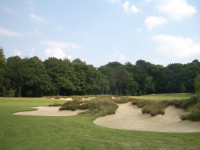 Time is rarely kind to bunkers and addressing the bunker appearance on existing golf courses is something that every golf club will have to do at some stage. Bunkers are in need of constant care to maintain their intended look and playability. Most bunkers experience erosion, heavy traffic and the surrounding grass - especially on the bunker line between sand and grass - is often exposed and vulnerable.

Over the years, sand from thousands of bunker shots accumulates on the edge of the bunkers, resulting in a distinctly different look to the bunkers than what was originally designed and built. On older golf courses many bunkers do not have any form of drainage installed and the sand has often been contaminated over the years. The technological evolution in golf equipment has furthermore made many bunkers obsolete and many older clubs feel a need to reposition them either by moving the bunkers or moving the tees. 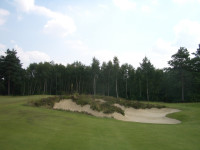 Whatever the reason is for choosing to address the look, position or condition of the bunkers, the club committees, green keepers and the golf course architect can normally choose to approach the project in 3 different ways; Renovation, Restoration or Redesign.

Renovation means keeping the bunkers in the original positions but provide them with a 'face-lift' so they appear in a better overall condition. This is often the preferred approach for existing clubs, as this can be done by an experienced green keeping staff and is a good way of addressing bunkers that are in the right position but has declined in condition over the years. It is also a useful way to install drainage in old bunkers, rebuild revetted edges or change the sand to achieve a uniform look, quality and feel on the course. 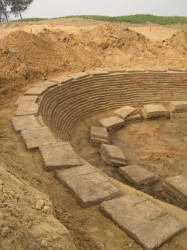 Restoration means actually trying to restore the bunkers to the exact historical look they had at a certain point in time. This approach is often chosen if the bunkers once possessed a unique and artistic character which has been lost over the years.

In the older days some architects, like Alister MacKenzie or George Thomas Jr., designed very creative and unique bunkers which (unfortunately) have lost most of their character over the years. The reasons can be many, but are often the direct result of the clubs maintenance regime - e.g. the introduction of motorized trap rakes which made it more difficult to maintain bunker noses and ragged edges.

Few old courses actually possess enough documented original merit to make them 'qualify' for a restoration project. However, some old courses would certainly benefit - both from a playability, historical and aesthetical point of view - were the bunkers to change to their earlier design. Restoration is a trend that is emerging in America and something that we might see more often in Europe within the near future.

One of the main problems with restoration is actually finding enough historical and photographic 'evidence' to be able to built exact copies of the old bunkers. When talking about restoring something, it is not enough just to copy or re-introduce the style of bunkers - the aim is to accurately recreate the earlier existing bunkers. Old aerial photos can provide a good 2D perspective of the bunker locations while old photographs taken from the course, magazines, programmes, etc. might help to document the height of mounds and bunker faces.

Deciding to redesign the bunkers will mean to change their look, size and shape completely. This is often the result in the case where the bunkers seem to have lost their character, are out of play or a new style of bunkering is introduced to the golf course. One of the major problem when moving bunkers from their original position is that many bunkers initially were build into naturally existing mounds and slopes.

It is often not possible to move or recreate these mounds, and there is always a chance that moving the bunkers to a 'magic' distance off the tee, might result in them looking awkward in the natural topography. When redesigning, it is also important to remember that moving the bunkers into new positions or changing their size or depth seriously influences the playability of the golf course and should be done based on the advice from a golf course architect.

The Role of the Golf Course Architect.

When undertaking relatively big, time consuming and costly projects like improving all bunkers on a golf course, a good team should be put together to make sure that the changes are well thought out, well constructed and well managed. In a lot of cases an experienced green keeping staff is capable of doing most of the actual construction work themselves. 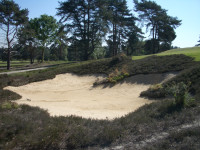 Sometimes it can also be wise to contract the job out to a contractor, or bring in a shaper to help shape the bunkers. Doing the project in-house often makes it easier for the club to project manage it, while bringing in a contractor frees up time for the green keeping staff to maintain the course while the work is carried out. No matter how the improvements are done, a golf course architect should be used to ensure that the changes to the bunkering improve the layout of the golf course as much as possible.

His knowledge should be used to come up with good design solutions, positioning and sizing of the bunkers and help control that the material used and the work carried out is of a desirable quality. He can also help prepare drawings and advice on the tendering process. Golf course architects are often knowledgeable on the history of golf and golf course architecture and are familiar with bunker styles from different eras of golf course design - this makes him an invaluable part of any improvement project that deals with older golf courses.

The Aim of Improving. 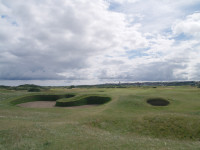 During my work, and as a keen student of golf course architecture, I have seen many bunkers being constructed, changed, added and removed. The main thing I have learned over the years is to ensure that all changes made to the bunkering actually improve both the aesthetic and strategic side of the golf course. Bunkers should not just be changed to follow the recent trends, but be well anchored in the history of the club and the era in which it was build. Back in the 1960s and 70s the buzzwords were 'modernization' and 'renovation' - resulting in the loss of many original bunker features. Recent projects show that the buzzwords now tend to be more towards 'historical heritage' and 'restoration'.

In my opinion the bunkers represent the character of the golf course - and, as with old buildings, care should be taken to protect the character for future generations of golfers to enjoy.


Philip is a Danish golf course architect working for the internationally regocnised golf course designers, Thomson Perrett & Lobb in London. Philip is currently working on a heathland inspired golf course in Turkey and has previously been involved with projects in Australia, Asia, Europe, Africa and the Middle East. 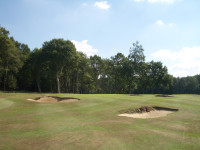 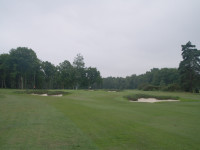 17: Choosing brighter sand can really make the bunkers stand out as here at Linna Golf in Finland.

7 + 8: Impressive bunkering at Queenwood near London - inspired by the early heathland bunkering. Difficult to maintain but spectacular effect.

11: Construction of a revetted bunker.

4: Interesting use of slopes, mounds, grasses and bunkers makes The Grove near London an interesting golf course to visit.

19: The infamous Hell bunker at St. Andrews has not always had a revetted edge.

For more information log on to www.tpl.eu.com or email Philip at pspogard@tpl.eu.com