ADAS is involved in a collaborative project investigating the effectiveness of buffer strips at removing sediment and Phosphorus (P) across the three Demonstration Test Catchments (DTC) reports Adrian Collins.

Riparian buffers can be effective at removing sediment and phosphorus (P) from overland flow originating from agricultural land and therefore can be a useful tool in ameliorating diffuse pollution, as well as providing other benefits such as biodiverse habitats.

Consequently, they are included as an important land management option under Environmental Stewardship. However, to date the functioning and efficiency of buffer strips is relatively poorly understood, including their effectiveness over time. This is important because buffers which have accrued P could themselves potentially become a source of P should erosion of the buffer itself occur. The timescales over which buffer efficiency changes is uncertain, and will vary depending on many factors including land use and soil type. 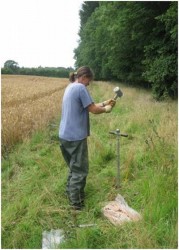 Four sites with similar soils, slopes, land use (in this case arable) and buffers of comparable widths but different ages were selected in each catchment. Soil samples from the upslope fields (all arable) and across the buffer strips were collected (Figure 1) in both summer 2010 and winter 2010/11 and analysed for a range of parameters including different forms of P.

Analysis is ongoing, but preliminary data show that for some forms of P, the buffers could potentially be saturated and effectively leaking P, and that this is likely to be related to age (Figure 2). However, final conclusions cannot be made until all data has been compiled, analysed and assessed. This project will provide useful information on the effectiveness and potential life-span of buffers, and help develop policy on buffer design (e.g. width) and management for the future.

Figure 2. Preliminary data showing the distribution in cross sections of water soluble total P across two CSS buffer strips in the Hampshire Avon catchment (field boundary on left, water body boundary on right). Darker colours represent higher concentrations, and the charts on the right show the absolute values at each depth. These data indicate that the water soluble P is at a maximum concentration at the downslope buffer edge, suggesting it may be leaching into the adjacent surface water body. (click on image for greater detail).

For more information on any of the above please contact Professor Adrian Collins on 01902 693404 or email adrian.collins@adas.co.uk.