0 In a Festive Mood

This year's Cheltenham Festival again proved to be one of the most popular events of the British horseracing calendar. A record 220,000 punters attended the four-day festival, with 65,000 there to witness the showpiece race, the Totesport Cheltenham Gold Cup, on the Friday.

Like most major events the planning and preparations for the Festival start immediately after the previous year's has finished. To find out what is involved in preparing the course I arranged to meet up with Cheltenham's Head Groundsman, Anthony Holman, and the Director of Racing, Simon Claisse.

Anthony took over the role of Head Groundsman two years ago having previously worked at the racecourses at Warwick (four years) and Folkstone (eleven years). With sixteen days of racing at Cheltenham during the year and three courses set in 600 acres of Gloucestershire countryside he and his staff of ten are kept fully occupied. 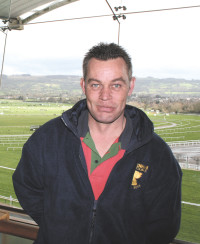 The course is in a wonderful, picturesque location, set out in a natural bowl surrounded by hills and high land. This topography often helps deflect some of the oncoming weather fronts, but also contains some cold and frosty conditions during the winter months.

Simon and his team all have qualifications in turfcare and understand the needs of the horse racing industry. All are multi-skilled and able to carry out any of the jobs required on the course as and when required, including grass mowing, fertilising, watering, moving rails/fences, renovating, divoting and reseeding.

Within the team there are two staff, Keith Jones and John Close, who are dedicated to undertaking all the fence maintenance and repairs. There are twenty four chase, eleven hurdle and over thirty cross country fences to look after. Once the season has finished in May they begin the task of completely stripping and rebuilding twelve of the fences, with a further twelve being replaced on a rotation basis each year. Over 9,000 bundles of birch materials are used.

The width of all the fences has been increased to 60ft. Horse and rider safety is paramount and, by altering the position of the rails, fresh ground can be made available for each day of racing.

All the chase fences, with the exception of the 14th, are permanently sited. Fence 14 has, in the past, been the cause of a higher than average number of fallers; being portable allows the Director of Racing to locate it in the safest possible position to suit the conditions.

During my visit, Richard Linley, the national inspector of racecourses from the Horseracing Regulatory Authority (HRA), was on site meeting with Simon and Anthony to decide the final position of the 14th fence and some of the hurdles for the Festival.

Further inspections are undertaken by Richard in the lead up to the meeting to ensure the track is in pristine condition and safe for racing; all the fences are regularly checked with particular attention paid to the take off and landing areas, ensuring they are stable and safe. Kevin and John have to keep a careful eye out for any sub surface damage caused by rabbits.

The condition of the course is constantly monitored; the soil at Cheltenham is a sandy clay loam averaging 150 mm in depth over a blue clay sub soil. The going for the course is maintained between good and good to soft.

It is surprising how quickly the going can change, even during the period of the Festival; Anthony has daily checks on the weather forecasts from his own weather station on the course and other national weather services.

A few days of windy weather can soon dry out the course resulting in the staff getting to work with their rain gun irrigators. Each irrigator has the capability of applying between 8-12mm of water to the whole width of the track for one furlong. There are enough irrigators to water the whole course in a day.
If watering is required during the Festival, the staff usually get to work straight after the last race, around 4.30pm, and often finish in the early hours of the morning.

The course has an extraction licence to draw 13,000,000 gallons of water from their reservoir. Last year, between June and October, Anthony was losing, on average, around 3mm of water per week through evapotranspiration.

However, they only waters to keep the turf healthy and, more importantly, to maintain the course going.
Once the racing season has finished, in May, Anthony will not water the course unless there is a desperate need to. Not watering the course in the close season achieves three objectives:-

• Reduces manpower required to manage the irrigators.
• Reduces the use of valuable water resources.
• Allows the soil to begin fracturing, thus naturally aerating the soil structure.

There is a fine line to be drawn with aeration. The course only gets verti-drained every three years and is slitted throughout the season with a Sisis slitter. The aim is to keep the soil structure stable; too much artificial aeration may destabilise it, making it unsafe for racing.

Anthony tends to use granular products applying the usual spring, summer and autumn fertilisers to achieve healthy grass growth. The choice of materials is based a soil and turf analysis undertaken by Steve Gingell, the STRI Regional Advisor for the South West and South Wales. He provides an independent report on the condition of the course. Based on this information and the time of the season, an appropriate fertiliser product are applied. One of the following fertiliser products is applied:

Summer Fertiliser: Nitrophoska Perfekt 15:5:20+2mg, a granular outfield/racecourse fertiliser applied at a rate of 15 grams m2 using about 9 tons of products per application.

Winter/Spring Fertiliser: Liquid iron as and when required along with another dose of Nitrophoska Perfekt 15:5:20+2mg.

Grass cutting is the most time consuming operation on the course. Summer height of cut (May-August) is maintained at 50mm. After August the grass is then left to grow to its racing height of 125mm. Having plenty of grass acts not only as a cushion for the horses but also helps prevent the soil from drying out too quickly.

Mowing frequency is dictated by the rate of growth and whatever meetings are scheduled. There are times when the course needs mowing twice a week to maintain optimum grass height.

Presentation is a key factor. Stripes and banding are usually achieved by mowing, brushing and rolling.

The rollers used on the course are custom made; in fact Anthony had a hand in their design and development. Rolling the surface back after race meetings is very important, however, the Cambridge roller is often too heavy to use in certain conditions and difficult to manoeuvre around the permanent fence features.

In conjunction with Rollason Industries a brand new concept roller, aptly called the Coursepaka, was designed. It comprises a series of deflated tyres on a heavy duty, linkage mounted frame. This linkage system makes it very manoeuvrable. Weighing in at just 750kg, the Coursepaka can easily be handled by a 40hp compact tractor, but can be ballasted to 1.25 tonnes for firmer conditions. The rollers have transformed the way Anthony can reinstate the course after meetings.

Weather and soil temperatures will dictate how well the course can recover. The last meeting before the Festival was on the 27th January, leaving less than six weeks for Anthony and his staff to get the course ready. The first task is to repair the damage and overseed any bare and worn areas, particular on the take off and landing areas. Over 50 tons of 70/30 rootzone are needed to repair divot damage after a meeting.

A lighting rig was used to aid germination, operating on a 48-hour rotation basis.

Mowing, rolling, fertilising and watering were continued as required to ensure the course was presented as good - good to soft for the Festival.
A number of other racecourse Groundsmen were drafted in to help, together with 20 dedicated fence attendants, 40-60 divot repairers and other auxiliary staff, most starting at 6.30am and often going on late into the evenings. Watering was not required this year, so the team were able to get to bed at a reasonable time.

Anthony was up at 5.30am every day, walking the course, with Simon, to declare the going. He carries three radios and a telephone during the Festival to keep him in touch with key personnel.

There are four days of racing, with six races on each day. Once each day's racing was finished, the staff were out repairing and preparing the course for the next day. Work included divot repairs, fence repairs, mowing and moving the rails to bring fresh ground into play.
Each day Anthony was responsible for a total of 106 staff. Over twelve miles of rail were moved and 190 tonnes of 70/30 rootzone and 65 bags of seed were used to infill the divots.

As usual Simon's first job after the Festival was to arrange a debriefing. This year the course was given the thumbs up by all concerned - the trainers, jockeys and the HRA. Good news for both Anthony and Simon, however, they know that nexy year will present new challenges.

They will not be complacent and the ongoing safety of all visitors, whether the four or two legged variety, will remain their main priority.