0 In At The Deep End

Any course manager finding his course caught in the worst flooding for over thirty years would have cause for concern. Put that course close to the sea, at one metre below sea level with 40 per cent of the surface area covered by water in the form of lakes and ponds, and add the fact that it is about to host a PGA International tournament, and the course manager could be forgiven for considering taking the next plane out. 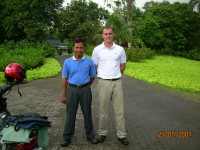 Not so Pak Tatang. Despite having been promoted from assistant to superintendent just months previously he had every confidence that his Pantai Kapuk Golf Course, 5 to 10 minutes from Jakarta airport on the island of Java, Indonesia would rise to the occasion. "I felt optimistic that the course would be ready, meeting all the international standards," he says. "I couldn't see any reason why this year's Indonesia Open, the 13th to be held at this course should be cancelled. My staff members are all experienced in handling these conditions. After all, they've been doing it for the last twelve years."

Nevertheless, as conditions worsened two weeks before the tournament with rainfall reaching an average of 33.32 mm per day, directors of the European Tour were considering doing just that. They approached Floratine's Indonesian distributor, Brad Burgess, of PT Klabindo Kartagusta Prima who has been supporting the Kapok course, to ask his opinion. "We met in Malaysia, and at that time the situation in and around Jakarta was looking grim," he remembers. "Sixty per cent of Jakarta was flooded, people were stuck in their houses and there were rumours of disease. The PGA asked if, in my opinion the tournament, scheduled from the 15th to the 18th February could still go ahead and, knowing that Tatang was a skilled professional who had everything under control, I reassured them that it could."

"In Indonesia January and February mark the height of our rainy season," Tatang explains, "and knowing this we are able to anticipate the situation. We can control the water level in our lakes, pond and drainage system using three large pumps that have the ability to move 500 litres of excess water per second. These pumps take the water into our canal system that runs into the sea. We deliberately lowered the water level so that during that week of heavy rain, although the lakes, pond and drainage system were all full to capacity, the course did not flood."

Tatang, who had been using Floratine's Tournament Prep Management Action Plan (MAP), (a combination of Carbon N for turf strength, Astron to encourage cell division and rooting with improved colour, P.K. Fight for stress tolerance and Turgor for wear tolerance and exceptional ball mark resistance) on his greens for the month leading up to the tournament, had also, since

the start of the rainy season used Pervade, the company's soil penetrant to flush the excess water from the surface into the drainage system. Alistair MacFayden, a Floratine Technical Advisor who has been assisting Tatang throughout, says that they applied Pervade once a fortnight instead of the usual once a month. "A conventional wetting agent would have kept water in the soil profile," he says, "which was the last thing we needed. Pervade, as a penetrate wetting agent has the opposite effect taking excess water away from the surface."

Pantai Kapuk golf course is built on sandy loam, which softened during the torrential rain, preventing mowing. "The structure of the sand was soft and wet," Tatang recalls. "If I had taken heavy machinery onto the course it would have damaged the soil structure and the grass." Part of the problem was that during the intensive rainfall the drainage system had jammed. "One of our fairways was flooded with water but not under water," Tatang continues. "Because of the sheer volume in the drainage system surrounding the course, the fairways could not drain properly until the water level went down."

Mercifully, on 7th February, 8 days before the start of the tournament the rainfall dropped to an average 4.44mm per day. "I can remember seeing Tatang mowing the fairways at 1.00am in the morning in order to get the course ready in time," says Alistair Mac Fayden. "Pantai Kapuk had a good reputation before Tatang took over, but with his promotion he saw an opportunity to take it to the next level. "

Certainly, there were no complaints during the tournament, far from it. Mikko IIonen who took the trophy, joined the other pros in declaring himself very happy with the condition of the course, especially considering the recent weather conditions, and when it was all over Pantai Kapuk was visited by Superintendents from all over the country who wanted to examine the quality of the course for themselves.

As the rainy season finally drew to a close, Tatang was able to reduce his applications of Pervade to once a month, but his use of Floratine products has not diminished. "These products helped me manage and maintain the green speed during the tournament from 10.6 to 11 feet," he says. "I always want good performance from my greens and I get maximum strength, good colour and good ball mark resistance especially during the stress of the rainy season." Alistair Mac Fayden reports that in addition to the tournament prep programme Tatang was using Protesyn to aid photosynthesis, Renaissance a multi nutrient package and Knife, a fortified iron nutrient.

"He basically uses the same programme all the time but varies it according to what he wants to achieve," he says. "We're here to help and advise if he needs it, but he rarely does. Not only is he an excellent Superintendent but a very strong character." Having hosted the Indonesia Open this year he has needed to be.


Thank you to Carol Dutton for the great article
Email:carol.dutton@btinternet.com.