Concern over the viability of intensively used community turf sports pitches is fuelling a drive to switch to alternative surfaces in a bid to ensure play for all right through the season. 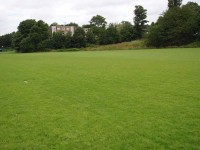 The rising popularity of grassroots and youth football in Britain has created a level of use that traditional grass pitches are struggling to accommodate.

As participation booms, local authorities are searching for solutions to ease mounting pressure on already hard-pressed budgets, as they strive to maintain playing surfaces to reasonable standards throughout the year.

Wear and tear on traditional grass pitches, coupled with the poor conditions that excessively wet weather creates, has reached untenable levels in some cases, prompting cancelled fixtures and an extended playing season because of that. The result is that groundscare teams have less time for renovation to bring surfaces up to speed for the new season.

However, two north-west authorities, Salford City Council and Bury Metropolitan Borough Council, are addressing the issue by pioneering a playing surface that relies on clover - a plant that all those who cherish turf have traditionally sought to banish from grass sward.

Trial results strongly suggest that the sportsturf mix of 'white' microclover and perennial ryegrass could be the answer to their prayers.

Salford piloted the Microclover Sport mix, supplied by seed producer DLF Trifolium, last year, with tests undertaken on the Patricroft recreation ground in Eccles - an area used predominantly for football, and one of the most heavily used in the city. 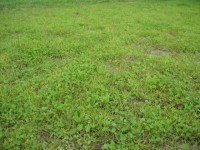 "We've found, even in a short time, that the wear factor has been very good," reports Tony Barton, Salford City Council's Environmental Coordinator. "The microclover has produced strong visual results such as a better sward and a fuller coverage, and we are predicting reduced maintenance and renovation levels for the playing area," he adds.

Salford is entering its first full year using the Pro82 mix and Barton expects significant cost savings to result from rolling it out across pitches in the city.

"We calculate a saving of £104 per pitch using the microclover mix. Taking the total 64 parks pitches throughout Salford, we would estimate a saving of £6,656 annually," he predicts.

Next spring and summer will reveal "the true benefits" of using microclover, Barton adds, when "the value of the product will really begin to show".
Although priced nearly £1 more per kilo at £2.80 than the Pro80 ryegrass he was using, Barton seems sure the microclover will prove a winner, for several reasons. "The slight difference in price will be more than offset by reduced maintenance, less need for feeding and the playability of pitches through the winter months," Barton argues. Independent trials by the Sports Turf Research Institute (STRI), and BSA grass trials in Germany have shown microclover blends to be more wear tolerant and give improved winter colour and appearance compared to standard lawn mixtures.

The product has proved popular in the rest of Europe, notably Germany, Denmark and Holland and has been slowly introduced to the UK, primarily targeting the domestic and now public sectors.

Salford is known for its high operational standards, explains Bernard Noon, Principal Officer for Green Space at the council. "We've taken a number of awards in recent years, including Green Flags for Victoria Park, Clifton Country Park and Blackleach Country Park, as well as the Service Team of the Year for groundscare awarded by the Association of Public Service Excellence (APSE)."

"We are always looking for new ways to improve and innovate, and microclover so far ticks all the right financial and environmental boxes."

Bury Metropolitan Borough Council is entering its first year using microclover, but has decided to launch straight into a seeding programme for ten sports pitches, confident of the maintenance benefits the mix will deliver. 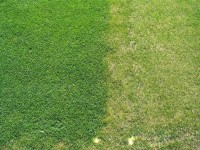 "I've been more than pleased with growth to date, despite the fact we have enjoyed good growing conditions lately with the rain and sun," says Parks Technical Officer Les Beardwood.

"We only seeded the pitches five weeks ago [May], and they're playable already. The growth rates are impressive and ideal, bearing in mind we only have a short time between the end and the beginning of seasons."

Beardwood believes that microclover has the potential for not only improved turf quality but also long-term cost savings. "The Pro82 mix was dearer than the Pro81 seed we were using, but we believe the benefits will outweigh this," he adds.

Microclover's ability to reduce broadleaf weed growth is one feature that he is particularly excited about. "If we find that this is the case, it could save me £1,000 a year in the cost of selective weedkiller alone. I always look out for market advances and have no objections to spending a bit more for quality and am not scared to take a risk," he states.

"All ten are heavily used throughout the year, as the number of junior football players continue to grow year on year," says Beardwood, "with games increasingly being played through the week and in the evenings."

Wear resistance and sustainability of colour are key factors in helping pitches keep their condition for longer - benefits Beardwood hopes will figure strongly with the switch to microclover.

"The real test for the microclover will be how well it holds up through the winter months and if the amount of cancelled games reduces. We will know by the end of the coming season if the positive early signs are sustained." 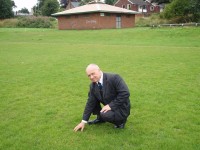 No watering was undertaken and the seed had germinated within two weeks, producing playable surfaces within five to six weeks. This year has been exceptional for growing. The periods of rain followed by sun have created perfect conditions but even so I was amazed at how quickly a playable surface was produced. We've cut the pitches three times since then.

Local clubs have been alerted to the change - Dobbies Football Club already commenting on how green the surface looks.

The 50 other pitches within Bury's boundary have been renovated with Pro81 for the last three years, which hold up well, although no microclover is present in the mix. I'll be looking for colour retention and wearability from the Microclover Sport Pro82, particularly during the December to February period when there's less light and pitches are taking a hammering.

Manchester Road playing fields was one of the sites on which Bury tested Microclover Sport Pro82. The pitch renovations were carried out five to six weeks ago on the three full-size pitches there and, as the images show, they are ready for use with a 80-90% full sward coverage already. This is a fantastic result given the fact that all three pitches were kored down to 10mm.

I shall be monitoring the seed performance over the season and, if all goes well, be looking to include the PRO82 seed mix again as part of our sports pitch strategy renovation programme next season."

All pitch renovations was carried out by Fine Turf Services of Macclesfield.