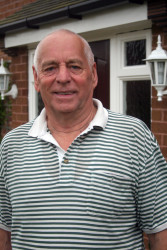 The last two or three decades have seen the arrival of a seemingly continuous stream of concoctions and innovations that have served to wholly revolutionise each segment of our undervalued industry. From the advent of hydraulic mowers to the laser-guided BeamRider, these machines have united in reducing the pressures that were once part and parcel of a groundsman's profession.

It has become continually more intriguing, then, to listen to the experiences of a man whose employment in the groundscare industry predates many of the contraptions taken for granted by today's groundsmen and women.

Sid Talbot, now retired and living in the small village of Tibberton, near Newport, Shropshire, began his career in 1955 working in the campus gardens at Edgmond's Harper Adams University College for twelve years before moving on to Telford & Wrekin council.

Although the quality of his own lawns suggests an underlying fervour for his former profession, the move was one motivated mostly by promises of hefty financial gains. "Going from Harper Adams to work for the council was more or less double the money," Sid recalls.

Sid's work at the council ranged from football fields to cricket grounds and bowling greens. "It was like the work at Harper Adams, just on a bigger scale, I suppose," he reminisces.

Sid's 'patch' ranged from local villages Tibberton and Edgmond to Telford-based localities such as Ketley; "a big area to cover considering the work wasn't full time" commented Sid. "Two of us used to go around in a pick up, and we used to do the same pitches every week. There was always work on the sports grounds 12 months of the year; the football season would come up immediately after the bowling and cricket had finished for the year, but even then you still had to do the topdressing, scarification and winter dressing."

Within this hectic work schedule Sid devoted his time to marking out, mowing, fertilising, and "getting everything ready" as well as "doing all the seasonal things as they come along". However, while this vague description succeeds in cutting the image of an 'ordinary' groundsman, it is when Sid describes the primitive nature of the equipment at his disposal that one appreciates the true scale of his former profession.

Take line marking, for example. "When we first started marking out, we had a bucket, and it was done with lime. We used to have to do it by hand; you can see how that has progressed from 1967," stated Sid. A far cry from the BeamRider and a practice that required considerable 'elbow grease' to get by. Drainage was always an 'issue' in Sid's day.

The pitches were inconsistent and the tools archaic. Sid was quick to explain the inconsistent nature of the soils on the council pitches. "This area (Newport, Shropshire) is good - the soil is better round here, the make up is good to work with.On the Tibberton pitch, for example, you can dig down two feet and you're still in soil. On the other hand, dig two inches somewhere like Ketley and you're in clay".

These clay based pitches suffered from a lack of technology; Sid described how the absence of tractor-drawn aerators resulted in the job being done with a garden fork, a practice ultimately variable in its success. "We ended up with one or two wet pitches that you had to get ready for the weekend," he joked.

Having worked for Telford & Wrekin council for the best part of 23 years, I asked Sid to share his views on the treatment of his pitches following his retirement in 1990.

Reflecting upon the relatively spartan nature of the equipment available to himself during his lengthy career, he couldn't help but remark "the things they bring down here to do these pitches these days - we rarely saw a motorised roller", referring to the manual device used by himself and his colleagues on numerous cricket pitches. "Sit on mowers, sit on rollers, gang mowers, it's all hydraulic; in those days when we were doing it, if the ground was wet the wheels wouldn't go round. I'd imagine it has come on a lot since my time".

However, when asked if the new technologies actually improved the art of groundsmanship, Sid's opinion was "I don't think the pitches are any better, because the pitch is as good as the work you put in on it, whether it's hand work or machine work. It depends on how much work you put in and who's doing it."

"In my opinion, I don't think they get enough work put in on them these days as they used to - well they don't, because while a cricket pitch needs at least three days work to have a good wicket at the end of the week, it's more or less three hours nowadays. They've got the machinery now, but they've probably got more work to do as well, getting from one place to another, so the whole process of caring for the turf just becomes rushed."

It is Sid's view that the advent of new machinery has reduced the commitment shown by Telford & Wrekin's groundsmen and he sees no improvement in sward quality. Much of the manual finesse associated with groundsmanship has gradually been eroded away by man-made technology.

Moving away from bittersweet reflections Sid remains satisfied with his accomplishments as a groundsman of Telford & Wrekin council. "Well I thought we did a good job, because we did all these football and cricket pitches and rarely got any complaints. The only thing that did go wrong was when it was wet; as I said, you couldn't get on them. I was happy with what I did on the whole, though. Over the 23 years I had a good job there, I was happy with it, we did our work with two or three good teams doing it, we knew what we were doing, that's the main thing! With the machinery at our disposal we did well, I reckon."

Ultimately, the debate over what is true groundsmanship will be one that rages on for many a year, and one that is unlikely to reach a conclusion. What is for sure is that Shropshire's Sid Talbot showed formidable levels of professionalism during his 23 years of loyalty to the local cause. He is a man truly deserving of his long retirement.