2 In the aftermath of Floods 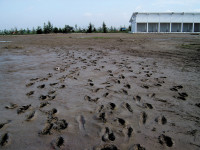 At the end of August Pitchcare and the ECB invited cricket groundsmen from across the UK, whose pitches had been affected by the Summer flooding, to attend a seminar at Yorkshire County Cricket Club's Headingley Carnegie Stadium

With the help of the Yorkshire County Cricket Club, Yorkshire Cricket Board and Leeds Metropolitan University the Flood Seminar event was provided for free and all Groundsmen, volunteer and professional, were made welcome.

All the guest speakers also gave up their time to speak to the delegates and passed on some valuable information to help those affected.

First up was Dr Iain James from Cranfield Centre for Sports Surfaces who asked whether flood sediments are hazardous? In the event of a flood, is sediment harmful to the grass, the players and the ground staff?

He asked whether any one knew if a player or a Groundsman had become sick after playing on flood affected pitches and, if not, did this mean that there's not a problem?

So, how do you evaluate whether pitches are safe to play on following a flood and what are the obligations when handling the sediment left behind? Evaluating the risk means looking at the local sources of pollution and whether the pathway (i.e. the flooding river) can have been polluted locally during the flood.

Iain stated that there were various sources of pollution from sewer overflows, industry, the urban and rural environment and from the sports ground itself.
The receptors, i.e. the players, ground staff and the general public could all be potentially at risk of ill health due to inhalation, ingestion and dermal exposure through cuts and abrasions.

During a flood there is considerable harm to the environment in the form of leaching and runoff causing landslide.

In early studies of the flooding this year, where results will hopefully be published soon, Iain has seen widespread destruction and distressed groundstaff, although there has been a remarkable and overwhelming urge to reinstate the grounds quickly.

Potentially, floodwater brings with it contaminants and diseases such as E. Coli, Salmonella spp, and petroleum hydrocarbons although, as yet, no heavy metal problems have been recognised. 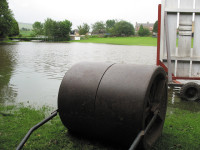 In the first instance the ground, and sediment, need to be tested to ascertain the levels of contamination.

Then, the safe and responsible removal of the sediment needs to take place. The ground may need to be cultivated, allowing time for degradation processes of small traces of contamination.

In summary, flood sediment is polluted although, generally, the risk of harm to health is thought to be low; site-specific analysis and risk assessment is advised. All ground staff should adopt the precautionary principle - wear PPE (NB - volunteers are considered to be groundstaff and, as such, subject to the obligations of the Health and Safety at Work Act).

If removing sediment there is an obligation to ensure that it is not contaminated before disposal, and correct, practical advice is time critical
Iain suggested that apart from the Cranfield website, www.cranfield.ac.uk, where updates will be published, other sources of advice include:

Next to speak was Jeff Perris of the STRI. Jeff focused on the three A's, following a flood disaster - Assess, Analyse, Action.

When assessing the damage collect information and all the associated facts. How the flooding happened, was it expected, can it happen again, the extent and severity of the flood and its duration?

When analysing the flood is there risk of repetition (DEFRA), risk of infection, risk of contamination to the grass and its playability but, more importantly, the chemical and physical analyses of the ground and sediment?

Flood affected clubs should carry out, or have carried out, particle size distribution tests, chemical tests (wide ranging) and growth tests to see how the area has been changed.

Once the scale of the problem has been determined look at the best means of removal, timing of remedial works and the client's needs.
Once assessed and analysed, look at the action for the future in terms of preventing flooding repetition (risk procedure) and dealing with potential health issues.

If the contamination is purely physical as opposed to chemical then action can be taken to remove the deposits safely and effectively.
Once all deposits have been removed commence corrective treatments to include chemical treatment (if necessary) and physical treatment of levels by means of aeration, topdressing, reseeding or returfing. 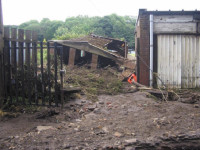 The final technical speaker of the morning was Alan Lewis of Total Turf Solutions who offered the practical options open to Groundsmen left in the wake of a flood.

Interestingly, Alan offered the following information saying that 'every time we have 1cm of rainfall, a tonne of water falls on every 100m2 of sports turf. He pointed out that for example Evesham Cricket Club had over 3.15m of water on their ground for over 3 weeks, which will have resulted in serious compaction of the ground.

The main effects of flooding, include loss of levels, deposits of sediment, compaction, soil nutrients loss and availability, crusting, poor infiltration rates, an altering of pH, decreased biological activity, a possible increase in weeds and pathogens and the sward make up and rooting depth. All of which reduce pitch preparation.

After flooding he reiterated the importance, prior to renovation, of having the soil analysed, not just for toxins, metals etc. but for pH and nutrient values which can be corrected as part of the renovation.

Apart from the normal reasons, the surface cleaning and scarification/brushing, are needed after flooding to remove sediment, crusting and dead grasses, this will improve infiltration rates and reduce surface compaction.

Choosing the right equipment for surface cleaning has never been so important. If the ground has toxins etc, then so will the waste removed from the surface! You may need a specialised waste contractor to remove waste off site.

In terms of surface restoration the planing off of the turf surface can remove many of the problems at once, by either Koroing or fraise mowing. It is important to note that not all squares are suitable and there is an increase in costs.

To get biological activity back into the square, improve gaseous exchange, relieve compaction, improve root growth and the movement of moisture and nutrients, aeration must be undertaken before any topdressing.

Two things will effect the sward make up after a flood: firstly the loss of grasses from being under water for a long period, usually Poa Annua becomes dominant. Secondly, the effect on growth habit by the lack of pitch preparation, where ryegrasses are allowed to crown. www.totalturfsolutions.co.uk/

In the afternoon, Bruce Cruse, from the ECB, talked about the fund that had been set aside for flood affected Groundsmen. This is called the England and Wales Cricket Trust Limited Flood Relief Scheme. The trust has made £250,000 available for a Flood Relief Fund.

The Fund is designed to help clubs return to the field of play as soon as possible and is only open to those that could evidence severe disruption or closure.
Clubs are able to apply for the grant funding to enable works such as access roads and services (subject to consents), ground works on the square, outfield and drainage, to carry out decontamination (subject to consents), for the general clearance and clear up. And the purchase or hire of machinery to aid the process.

The limitations of the Fund are that a maximum of £5,000 per club could be issued except in exceptional circumstances where this may be extended to up to £10,000. Any item or project which is part of an ongoing insurance claim is not covered by the fund. Neither are professional fees (for surveys etc).
Clubs wishing to obtain funding should apply in writing with photographic evidence. The application should include a summary of damages and costs obtained, where possible, and the application must include details of two club contacts.

In the afternoon Chris Wood (ECB Pitches Consultant) and Tim Packwood (Head Groundsman at Worcestershire CCC) provided a very in depth talk about the problems at Tim's home ground at New Road, Worcester.

Tim regularly has to suffer flooding due to the close proximity of the River Severn. Since the early summer flooding started this year there had been no more play at the club.

Through the question and answer session and a great photographic sequence Tim offered a great deal of practical advice as to how they overcome their problems. This included a novel way of removing silt from the square while water remained on the field. Tim and his staff (wearing waders) take out a lute attached to ropes and drag the lute back and forth across the square to lift the sediment. As floodwater recedes the disturbed material is washed away from the raised square making recovery much quicker once the ground dries.