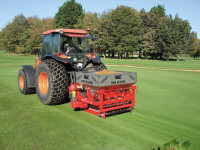 Deeping St. James sounds like a double entendre from a sixties Carry On film. It is, in fact, a village close to Peterborough and the home of Blec Equipment and the eternal demonstrator Gary Mumby.

In the twelve years of their existence the company, run by Gary and his wife Sue, have built a formidible reputation for designing, building and importing niche machinery for the UK market and beyond.

And just to continue the double entendre theme, the company have recently lauched a vibrating injector (ooh Matron!)
Pitchcare takes a look at the history and developments of the company ...

It is early morning just two days after the Christmas and New Year break and I am driving to meet what must surely be one of the busiest men in our industry. My destination is the unlikely sounding Deeping St. James, near Peterborough, home of Blec Landscaping Equipment co. Ltd. Arriving at 9.30am I find Gary Mumby with his wife, and fellow Director, Sue already engrossed in sorting out orders and deliveries for 2008 at their office.

The story behind this hard working husband and wife team is quite remarkable and, indeed, very inspiring to any would be entrepreneurs. Beginning in 1996 Blec will see in the 2008 New Year as a multi-million pound business with exports worldwide and an enviable array of British built and imported machinery available.

Blec has occupied the current Spalding Road premises since the partnership was formed those twelve years ago. Prior to that date the company was part of the Mumby family business which had its origins in landscaping and was founded by Mr Mumby senior in 1980. Much of their work was on new housing estates in Peterborough and surrounding districts. Machinery enthusiasts from the outset they were always seeking out and purchasing any new time and energy saving equipment which became available, including two new high quality German Fendt tractors, the first in the area in 1988.

Finding the right kit for the job was not always easy and Gary decided to try his hand at custom building a suitable machine for grading and levelling soil, and with the capability to also act as a mini digger. The result was the now famous Blec Multi-Scraper - still popular and available in six sizes today. This first in a line of many Gary Mumby designs was an instant success and much admired by fellow landscapers near and far. The work rate was faster than anything else on the market and the versatility of the machine impressed everyone who saw it in action. 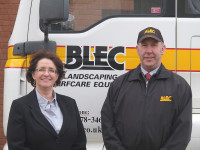 Realising that there could be a reasonable market for such a product, Gary decided to book a demo plot at the IOG show at Windsor, forerunner of the current Saltex show. "We were pretty much the only people doing live demonstrations then" says Gary. "The response was amazing with hundreds of enquiries pouring in after the show. I thought this is it I'll be a millionaire in no time" he laughs.

Of course, it didn't work quite like that but they did very well considering they only had two machines to sell, and soon a new company was formed to market the products. The Blec name was originally meant to be an abbreviation of British Landscaping Equipment Company, but bureaucratic red tape prevented the fledgling company from using 'British' in the title. Gary even wrote to John Major, their local MP, but to no avail and so 'Blec' it has remained.

All the new UK products were designed and developed by Gary although, by this time, the company was also acting as sole importer for innovative machinery from the USA. Exports too were picking up with France and the USA becoming particularly enthusiastic recipients of Blec kit. Virtually all sales enquiries still came from live on-site demonstrations at shows, home and away, and also by word of mouth recommendations. "A testament to the enduring quality of the products" says Gary.

In 1996, with fifteen employees, the company felt confident enough to move to brand new purpose built premises for the manufacture of an ever increasing range of new engineering ideas and inventions constantly flowing from Gary's fertile and imaginative mind. At the same time Gary and Sue Mumby became sole owners of Blec and the family partnership was dissolved.

The company has since gained an impressive pedigree and history of bringing new and often unique ideas to the turfcare industry market. They were the first company in the world to produce small compact versions of stone burying machinery and, more recently, launched the Vibra Tine Sandmaster as an attachment to the Ground Breaker rotary decompactor.

The latest creation is the Sand Injector which was launched at 2008 Harrogate Week. There are also plans to introduce a brand new tractor mounted pneumatic decompactor and sand injector for Saltex 2008 demonstrating that Blec intends to lead the market in sand drainage system technology.

In 2002 Blec opened a new South Carolina depot in the USA and Blec USA Inc was born. The company now exports 20% of its 60 % total export production to the States.

The current Deeping St. James premises total around 40,000 square feet of manufacturing facility, parts department and offices with plans to expand this to 60,000 square feet in 2008. At present the company employs 50 people and has a full complement of delivery and service vehicles to cover the country and support its existing customers as well as any required demonstrations.

Gary and Sue Mumby are very optimistic for the future development of Blec and have developed ambitious marketing strategies and business plans for expanding the business by 100% over the next three years.