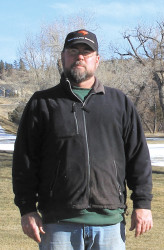 Sean Sullivan, Superintendent at The Briarwood Golf Course, Stateside in Montana, has introduced black bunkers as an environmentally-sound solution to replace traditional sand.

Sean was one of ten American Superintendents who visited BTME Harrogate as guests of Bernhard and Company and the GCSAA.
Here he explains his thought process and how successful the implementation has been.

Built in 1982 the 18-hole, privately owned, Briarwood Golf Course covers 350 acres, of which 300 are maintained. Sean's first task when he arrived in Billings, Montana from Georgia in 2002, was to arrest the course's slide in the rankings - it had gone from 'number one' in the mid-1990s to its lowest ever rating.

Sean explains "I was brought in to try to stop the bleeding and put the country club back on track. In this part of Montana there may not be many golf courses but there is still considerable competition in attracting membership."

Following the re-design of some of the greens complexes, bunker renovation was next on the agenda. And this is where Sean had a radical plan. "All other golf courses in our area had undergone renovation and they had used white sand. I was looking for a hook to draw in new membership. I had seen a couple of courses in North Dakota using coal slag. They were near a tower plant where the slag is a by-product of burning lignite coal. It is almost jet black and looks like glossy glass."

The product proved remarkably suitable as a replacement as it is dense, does not blow around in the wind and weeds cannot grow through it. The price was similar to white sand and nearly all 300 members of the club voted in favour of the material, with only one or two gripes.

So the club went ahead and started the process last year - work was completed early in the spring.

"It was a fantastic project. Not only was it an environmentally sound project, it brought us a lot of media attention from TV and newspapers because of the novelty factor" said Sean. "And when people are flying into Billings airport they get the most striking view of the bunkers." 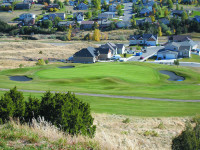 "There are other benefits as well" said Sean. "The material actually causes less damage to the sharpness of cylinders and, because it is heavier, less of it is thrown up onto the surrounds and greens. In addition, the members say that it is easier to play out of and does less damage to their clubs."

"The comparison between the glossy black and the green grass in spring and summer is absolutely wonderful, unbelievable as that sounds."
The golf course has two distinct designs. The front nine is tree-lined parkland and the back nine has a changing elevation through a series of hills and ridges. Between the lowest point and the highest spot on the back there is a 350ft change in elevation.

"Three holes are cut into the ridge on the back nine and are reputed to be the hardest holes in Montana, though that could be just members talking," says Sean. 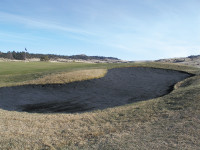 Billings is in a flood plain of the Yellowstone River. Snow and rainfall provides around 14 inches of moisture a year. However, the area is classed as semi-desert with very low humidity. Temperatures range from minus 8OC in December to 112OF in the summer, although the night-time temperatures at that time of year still plummet to around 0OC. "We are so far north that we have people golfing during the summer from 5.00am in the morning until 10.00pm at night."

Irrigation here is a must, as areas not watered quickly turn to dirt instead of grass. "It was another of my priorities to get enough water to the course to solve these issues" says Sean.

A 2.5 mile long pipeline pumps water from the Yellowstone River and this is then stored in irrigation lakes. But, that in itself is another issue. More than one million gallons of water can be applied in a night and, with the amount of salt in the water, this means that, by the next day, the grass starts to wilt from too much salt. This creates a lot of thatch and bare areas.

With an alkaline soil, the main grasses were bent grass on the greens and Kentucky bluegrass and ryegrass on the fairways and rough. "I have switched to new salt and drought tolerant ryegrasses, and we are also experimenting with slender creeping fescues like those used on some courses in Scotland. Luckily, we do not have disease problems but we have purchased a sulphur burner to adjust the pH of the water and lower the pH of the soil." 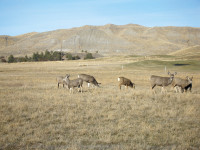 With only one million people in the whole state of Montana, living mainly on ranches and farms, Billings is the largest city with a population of 100,000. Whilst the people population may be low, the animal population is classified as high. This includes bobcats, coyotes and eagles, but the biggest nuisance is the mule deer. They use the golf course as a safe zone away from hunters but, in the process, do terrible damage to the greens.

Top quality course presentation is vital to retain and attract members. Briarwood have the best equipment available, including John Deere fairway units and Toro equipment for rough, greens and tees.

Sean has also inherited a 1960's Atterton & Ellis grinder, something Stephen Bernhard would surely have discussed replacing at Harrogate!

Sean joined BIGGA in April 2007 and is studying to become a Master Greenkeeper. When not involved in golf Sean's passion is for old British cars. He is currently restoring a Triumph TR7 and, whilst living in Atlanta, was a member of the Georgia Triumph Club which boasts more than 90 members.