0 In the 'court' of King James 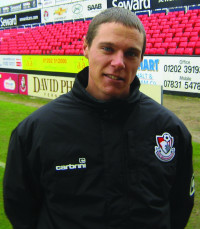 "I used to watch the greenkeepers riding up and down on their mowers and thought, that's what I'd like to do when I leave school"

At the time of writing, things are rosy for the south coast football teams. Portsmouth, after all their recent woes, look to have stabilised their position in the Championship whilst, a division below, Brighton, Southampton and Bournemouth occupy three of the top four spots. Of the four, only Bournemouth have never reached the top flight, and promotion to the second tier would be a return to the 'good old days' of the late 1980s under Harry Redknapp, when the club enjoyed three years in the old Division 2.

AFC Bournemouth or, to give them their correct title, Bournemouth & Boscombe Athletic Football Club, have come back from the dead on more than one occasion. As recently as the 2008-09 season, they were docked seventeen points for going into administration. Enter the youngest football manager in the leagues, thirty-one year old Eddie Howe, to resurrect the club's fortunes when all expected a drop into the Conference - a last day win away at Morecambe securing their league status.

The following season saw the club gain automatic promotion to Division One, and their form has continued this season, even though Howe's recent move to manage Burnley cast a shadow over proceedings.

The club is now under the management of Lee Bradbury, who has retired from playing to take on the role. He will be assisted by Steve (Legend) Fletcher, the latter with a stand already named after him for his playing commitment to the club. 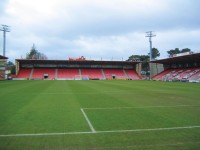 On the day of my visit - a rather dreary end of January one - the club had just enjoyed a one-nil win over table toppers, Brighton, and the pitch looked to have enjoyed a thorough aeration. As I walk through the tunnel (there were no cheers to welcome me) to meet Head Groundsman, James Lathwell, I am struck by how good the pitch looks, bearing in mind the recent poor weather.

I am also struck by how young James is - or maybe I'm just getting old - at just twenty-six, he is one of the youngest head groundsmen in all leagues.
James moved to Dorset at the age of twelve from his home town, Leighton Buzzard, already a confirmed 'gooner' courtesy of his father's love of the Arsenal. As a Spurs fan, we share some light-hearted banter, agree that both clubs are playing great football this season and get on with the interview.

So, how did he get into the industry?

"When my family moved to Wareham, our garden backed on to Wareham Golf Club, and I used to watch the greenkeepers riding up and down on their mowers and thought, that's what I'd like to do when I leave school." 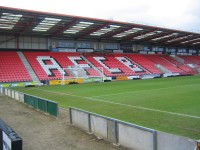 "I studied my National Diploma in Horticulture at Kingston Maurward College in Dorchester, and was fortunate enough to be taken on as a greenkeeper at the Dorset Golf and Country Club, whilst I completed my NVQ3 in Sports Turf Management at Sparsholt College."

After five and half years at the club, James had risen to third assistant and had also become an avid supporter of AFC Bournemouth. "I fancied a change and, with football as a passion, I contacted the then head groundsman, Ricky Rawlins, and offered to help out when needed."

Ricky and Andy Gray (the current head groundsman at Southampton FC) had been preparing Bournemouth's Dean Court pitch on a contract basis, but had split their duties; Andy returning to St. Mary's and Ricky staying at Dean Court.

"Ricky was glad of the help and, when it came time for him to move on, he recommended me for the position."

James took on his new role in September 2009 and, apart from a black layer problem that he has since aerated out, he inherited a pretty decent pitch.

For much of the time, James works alone, but is assisted on match days by five helpers. One of these is Jim Scammell, who looks after the club's two training pitches at Canford School in Wimborne Minster. Jim is employed by the school, but is paid by the football club when assisting James.

Another 'assistant' is Paul Wright, who runs his own 'Lawns In Need' gardening company. "Paul is a life-long supporter of Bournemouth," says James, "and, at 'sixty-something', really enjoys helping out on the pitch. He [Paul] jokes that the club has 'more of his equipment in our shed than he has on his van' and, to be honest, it's hard to argue with him."

One of Paul's 'bits of kit' is a Groundsman 345 pedestrian aerator that James uses to aerate the pitch. "The whole operation takes eight hours," says James. "Whilst I'm doing that, Paul is usually following up behind with the Honda HRD 555 rotary mower. As you might imagine, with everything else to do, it takes more than a day to complete!" 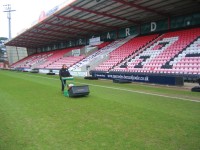 The pitch is maintained at 25mm, with match day presentation undertaken with the club's Dennis G760 34" cylinder mower. "It's my favourite bit of kit and does a fantastic job. I use the verticut and hard brush cassettes regularly as well, but the scarifier cassette is not really man enough for a football pitch."

Other kit at his disposal is a Dennis Premier 36" "for back-up", a SISIS Variseeder, a SISIS Quadraplay, a Kubota B2710 27hp tractor, a John Deere 2653A triple, an Allman sprayer and two strimmers - one Stihl and one 'cheap as chips'. Much of the equipment is sourced and maintained by M&S Enterprises of Hedge End.

"To be honest, I need to replace some of it, if only to let Paul have it back! I wanted to purchase a SISIS Aeraid and had almost had the budget approved when the ticket machine broke down. That cost £16,000 to replace. Needless to say, my purchase didn't get sanctioned!"

"So, I was on the phone to Andy at Southampton, who said I could borrow his aerator. That's the great thing about this industry. Regardless of who we work for, and the fan rivalry between clubs - especially along the south coast - as groundsmen, we all get along and help each other out. I am often on the phone to Andy to pick his brains; he's been a great help. I also use Pitchcare quite a bit to research all sorts of things." 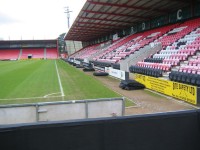 With the pitch looking good heading into February, I ask about its make-up. For example, does it have undersoil heating? Having choked on his coffee, James explains that it is a basic fibresand construction, with the only defence from bad weather being frost protection sheets. During my visit, these were alongside the pitch in readiness for the forecast drop in temperatures at the weekend. "They work down to about minus 4OC. I have an army of willing volunteers to help me put them out," he says. "After all, no one at the club wants to see a game postponed, the revenue is so important to a small club like ours."

End of season renovations will be carried out by Tonrin Contractors, who were recommended by Andy Gray. "I've been given a seven week window, starting on 23rd May. The plan is to fraise mow the pitch, apply 90 tonnes of sand, vertidrain and overseed with fifteen bags of Johnsons Premier Pitch, probably, although I might try R14."

"I'm fortunate that the stadium does not host concerts, as Bournemouth is well served in that regard by the Bournemouth International Centre, the Pavilion and various other venues." 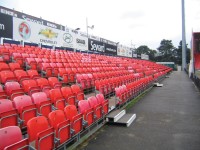 "We have a really early pre-season friendly against Spurs - at the end of July. It's a regular fixture since Harry Redknapp took over the club and it's his way of helping our finances. He still has a huge affection for Bournemouth and will often turn up on match days if his team are not playing. We also have a Spurs player on loan - he's not bad!"

With Harry Redknapp living at nearby Sandbanks - the most expensive strip of real estate in the UK - it is, perhaps, not surprising that the new club chairman is property developer, Eddie Mitchell, whose company, Seven Developments, undertake much of their work on the exclusive isthmus.

"Mr Mitchell has big plans for the club," says James proudly. "The first thing we need to do is buy back the ground - it was sold when the club went into administration. Once that has been achieved, the temporary south stand will eventually be replaced with a permanent stand that will include a hotel and conference facilities." 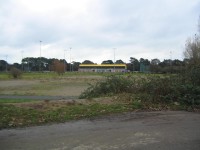 "Behind the south stand is an area of waste ground where the club want to build new training facilities. It makes perfect sense to have everything together." This will also tidy up the area between the football stadium and the nearby Bournemouth Athletics Stadium, which are all part of Kings Park, where municipal football and cricket pitches are also situated.

"I've seen a huge difference under the new owners," says James. "Things like the advertising boards around the ground are now all current - I'm sure some of the old ones were advertising companies that had gone out of business! The car park will be also be resurfaced and marked out. The whole place has had a lick of paint, the bar and conference areas are now busy, with loads of activities going on for supporters. It's all very positive, and I'm really delighted for the club."

James Lathwell is a young man who is clearly enjoying his move into football groundsmanship and I wish him, and my local club, all the best for the future ... even though he's a gooner!