You want impressive? You got impressive! Tiger Woods called it the "best course in Europe" and he is talking about a course that is just four years old!

Golf has become more accessible in recent years. One company which has been at the forefront of opening up the sport is Troon Golf, a luxury golf management company who have, in the past seventeen years, built up a portfolio of close to two hundred quality golf facilities around the world.

Dana Garmany founded the company in 1990, with Troon North Golf Club as its flagship. His remit was to give golfers, regardless of ability, the opportunity to play a quality course with interesting challenges.

One of its newest resorts is The Grove in Hertfordshire. Opened in 2003, The Grove features championship golf and luxurious accommodation in the heart of England, only thirty minutes from London's West End and Heathrow Airport and within the M25 corridor.

Often referred to as "London's Country Estate," The Grove was formerly the home of the Earl of Clarendon. The house has been restored and converted into a luxurious five star 227-room hotel complex, whilst the grounds contain beautifully manicured gardens and an eighteen hole golf course of the highest standard.

The course was designed by the renowned golf architect, Kyle Phillips, whose portfolio includes the Kingsbarns course in Scotland. The Grove was constructed in 2001 and officially opened in 2003 when the hotel complex was completed.

Gary Player said of it "The Grove is without doubt one of the finest facilities I have ever seen anywhere in the world." It has, in four short years, earned the reputation of being 'the best pay and play course in the country'. With over 27,000 rounds of golf being played each year, running close to its design capacity, how has all this been achieved?

M J Abbotts were contracted to build the course, remodelling and shaping the land under the direction of Kyle Philips and his experienced 'shaper'. The design concept was to bring the characteristics and topography of a links course inland. 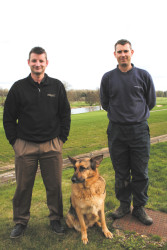 Over 300,000 cubic metres of soil were moved during the construction. The land yielded many interesting features, including two old lakes which were subsequently dug out and re-lined. A series of pumps were installed to regulate the water, these lakes now form a wonderful backdrop and wildlife corridor for the course.

Course Manager at The Grove is Phillip Chiverton, who became involved in the project over six years ago during the topsoil strip stage of construction. He has plenty of greenkeeping experience, having started his career in the early 80s working at several clubs including Bridport and West Dorse Golf Clubt, Wentworth and ten years at the Buckinghamshire Golf Club.

Phillip's Head Greenkeeper is Andrew Whittaker, and there are eleven greenkeepers, an irrigation technician/first assistant, two mechanics and one full time administrator. He also enlists the help of six casual staff between May and October.

A comprehensive training programme is in place for all the staff. It combines both in-house and external training. The staff are all relatively young and are qualified to various levels ranging from NVQ level 1-4. Much of this training is carried out by Andrew who has set up a simple matrix programme to ensure that they are trained in the basics of greenkeeping such as dew sweeping, divoting tees and fairways, bunker raking and equipment usage.

The Grove also employs eight full time gardeners, and an arborist, who work in tandem with Phillip's team of greenkeepers.

The machinery list at The Grove is impressive. The sheds are full of top of the range equipment. All machinery is purchased outright. Most of the turf maintenance equipment is Toro and includes ten electric Toro Workmans. Tractor models are Kubota.

Mowers are kept in prime cutting condition. Cylinders and bottom blades are regularly sharpened and reground in-house. With so much regular top dressing going on the greens, and the height of cut being low for fast green speeds, this is an essential part of the weekly programme. Height of cut on all machines is checked daily.

Tees and greens are renovated three times per year in April, July and October. This involves closing the course for three days each time the work is undertaken. It usually involves hollow coring, feeding and topdressing.

Tine sizes are determined on weather and turf grass conditions at the time.

Sand is applied across all twenty greens following core aerification; the greens are also topdressed regular throughout the year depending, again, on conditions. The tees also receive sand dressing during renovations and the fairways are top-dressed after core aerification or Graden work.


There are eighty-five bunkers, all filled with Masters Leisure Sand from Dorset and all are raked daily. The greens and tees are cut daily using Toro pedestrian mowers. They are all USGA specification greens, sown with 100% Penn A4 bentgrass. Coming out of the winter period they were in an excellent condition; good colour, tight and very firm.

Phillip and Andrew have developed an agronomic plan, which outlines any project and major maintenance work to be carried out for the year ahead, this also shows time lines for any fertilser and chemical applications.

This plan is sent to Troon Golf in Scottsdale Arizona, it is discussed in detail with the Director of Golf, Spencer Schaub, and signed off by the vice president for Agronomy Jeff Spangler who visits three times a year.

Pest and disease problems have been few with the exception of a nematode issue on some of the greens. It has taken three years for Phillip and a team of dedicated professionals to resolve this issue, working closely with Dr Colin Flemming (Nemotologist) from the Queens University in Belfast and Mark Hunt from Headland Amenity, to identify the particular Root knot nematode and to find the right methods to eradicate the problem and work around the issue, along with ensuring the grass plant remains healthy enough to withstand the nematode activity.

Typical of many resort courses, buggy transportation paths meander their way around The Grove, these are designed in such a way that they are rarely seen when playing the course, but perform a very important role by keeping all golf traffic off the grassed areas. Even the Greenkeepers have to use them.

Phillip believes that having a reliable and flexible irrigation system is a key component to achieving the high standards of turf grass quality that is expected at The Grove. The course is fitted with a comprehensive system with pop up watering on greens, tees and fairways.
The system was designed and installed by the main contractor who were asked to also consider the irrigation require

ments of the estate and gardens as well.

The pump station is fitted with four Grundfos CR Series in-line vertical multistage pumps, which are the industry standard for golf courses and estates. They are service friendly with easy access grease points, drain and priming plugs for maintenance or shut-down periods during winter.

The pumps are connected to Rainbird Nimbus II software, a PC based system controller with decoder units, and delivers us up to 140 cubic meters of water per hour. During the height of summer the pumps can be running flat out for seventeen hours each day.

The pump station is also fitted with a variable speed drive control unit which controls the speed at which the jockey, or lead pump, runs at. The variable speed drive will select one of the four pumps as the lead pump according to the hours worked and keep on switching between the four so that they all will have worked a similar amount of hours.

The pump station is also fitted with a GSM Text alarm system, which will send a text message with the relevant fault such as 'Phase Failure', 'Low Water', 'Low Pressure', 'Pump Fault', 'Incoming Water Fault' and 'Tank over-fill'. This allows these signals to be sent to the mobile phone of a supervisor on call during the night, receiving these messages and act as required to rectify the problem as soon as possible without losing too much of the irrigation time, this was an added benefit during the height of the hot season last year, on a free draining site not receiving adequate irrigation as planned has a sever impact on turf grass health the following day.

Irrigation needs are based on calculated evapotranspration rates, and soil probes, replacing a % of what has been lost during the day. On average the E.T during the day in the height of the summer can be up to 5mm per day. Water is supplied through a borehole with an extraction licence via Three Valleys Rivers Authority, who have a pumping station near to the course and work closely with the club to fulfil their needs.

The course has its own weather station that is linked to a PC controller, allowing watering cycles to be planned and coordinated. Priority is given to greens and tees, followed by the fairways. The system cannot water all areas in one cycle, fairways are broken down into phases and run in harness with tees and greens needs.

Phillip's strategy involves deep and infrequent watering; this allows water to penetrate deep into the soil profile. The benefits of doing this are many; it encourages the grasses to root deeper, helps flush away any unwanted salts, and reduces the frequency of watering. With water restrictions high on the agenda, Phillip is mindful that The Grove, like many golf courses, have an obligation to utilise water resources more efficiently. That is why they have invested in the best water management systems available and employ a full time technician to oversee the Irrigation System.

In 2006 The Grove hosted the American Express World Golf Championships, one of three WGC events worldwide. The staff were commended on the quality of the course produced during the championships. The eventual winner, some chap called Eldrick 'Tiger' Woods, said of the course, "I loved The Grove. Let me tell you, it is very, very impressive.

I would say it's the best-conditioned golf course in Europe; certainly from my experience. Everything was perfect; the course is great, the tees, fairways and greens were incredibly manicured, the practice facilities were amazing. And the food we had at the club all week was magnificent. This was the benchmark for how a tournament should be. It was that good."

A fine testament indeed to all the hard work and dedicational the staff have put in since The Grove opened in 2003.