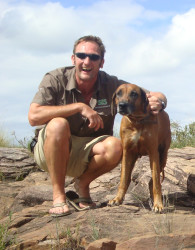 The Africa Cup of Nations was first held in 1958. It was sanctioned by the Confederation of African Nations (CAN) and is a biennial competition between the top sixteen international teams in Africa. Angola was selected as host for the this year' tournament.

Support in Sport (SIS) was awarded the contract to design and build the football pitches.

The Republic of Angola is situated in south central Africa and was a Portuguese overseas territory from the 16th century to 1975. Following independence, an intense civil war was fought between 1975 to 2002.

The country's resources include oil and diamonds, however, its life expectancy and infant mortality rates are both ranked amongst the worst in the world. In August 2006, a peace treaty was signed with a faction of the FLEC, a separatist guerrilla group from the Cabinda enclave in the north, which is still active. About 65% of Angola's oil comes from that region.

I have enjoyed a successful relationship with SIS in previous years. George Mullan of SIS contacted myself, Alan Ferguson of Ipswich Town and Steve Bache of Hampden Park, amongst others, to ensure the tournament preparations were successful.

The scale of the project in Angola, considering the time frame, was immense. The brief to SIS was to design and build 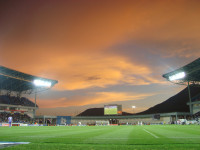 fifteen pitches. Stadiums at Benguela, Lubango, Cabinda and the capital, Luanda, would stage the matches, with training centres at each location.

SIS completed all pitches for the CAN 2010 in early November, with the tournament due to commence on the 10th January.

Arriving in Angola was like the first day at school, I did not know what to expect.

The flight from Copenhagen to Luanda was smooth, but then I had to connect to Lubango where I would be based. "Passengers" are given receipts and then have to "wait" for the opportunity to collect a boarding pass. Much of my childhood was spent growing up in licensed premises, and I imagine the desk attendants having the same feeling I use to get at last orders, with everyone in the pub demanding serving. In fear of spending the rest of your days in Luanda airport you have to lose the English gent's approach. Back to my school days I now have found a use for "British Bulldogs". 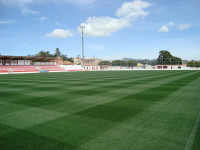 Telmo Manuel Pesserio greeted me at Lubango airport and we were given a tour of the grounds under our responsibility. Estadio Nacional Da Tundvala is a 20,000 seated main stadium. Nossa Senhora do Monte, Ferrovial and Benfica comprised the training grounds. At Benfica I met John Tate, a much travelled greenkeeper who, along with Telmo, had been establishing the pitches the previous few weeks. John had experience of working in Africa and understood the climate.

I arrived on 6th January, with training sessions scheduled for four days later and the first games on the 13th January. Most groundsmen who have worked in tournaments will confess that the pitch is not always considered when scheduling fixtures. I am not a groundsman who gets overly concerned regarding the usage of a football pitch.

One strategy is to inform of the consequences of any proposals, and potentially educate the planners. It is also advisable to get the teams onside, and we managed to achieve that in the first few days of training. 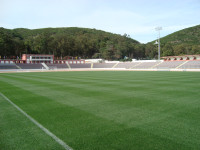 Cameroon, Gabon, Tunisia and Zambia were based in Lubango, and COCAN, the organisers, had scheduled morning and afternoon training sessions to be distributed across the three training facilities.

It became apparent that the schedules may not be accurate - I had been asked by Zambia, on day two, what time they would train the following day. Requesting more precise information from COCAN, I was informed that "it was in the hands of the Gods".

The grass cover on the pitches was excellent, with 100% rye grass. Complications, such as no water during the establishment, had reduced the grow-in period. A nutritional and irrigation programme had been advised which was designed to encourage rapid development of the plant. As a consequence of the programme, and the Mediterranean climate, disease was present. Pythium "damping off" developed, so we decided on a cultural control solution. Turning off the irrigation and fertiliser spreader we allowed the climate to energise the grass. The pitches dried out and the attack was controlled. A preventative foliar of low N, wetting agent and fungicide was applied midway through the schedule. 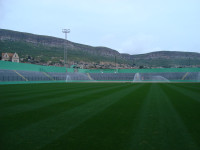 The stadium pitch required different management. Soil and sand suppliers in Angola do not possess the range of products we are used to in Europe. The rootzones for all the pitches in Lubango were coarser than ideal. Stability was a consideration. Rooting was encouraging, but the texture of the soil inhibited binding.

The maintenance plan for the stadium comprised match day preparations and allowing the pitch as much time as we could to rest and recover. The pitch was established from seed, but our techniques were similar to that used on a newly laid turf pitch. Wetting and rolling was the key, and worry about the consequences on 25th January! Giving the surface extra weight and firming enabled us to stabilise the pitch. The teams and management were extremely satisfied. 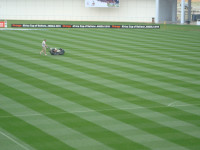 Machinery for the maintenance works was restricted until the last day of our programme. A truck arrived on the 24th, match day, and off loaded a wide range of kit. All the machinery will stay in Lubango.

For the training grounds and the stadium we used two triples, one heavy, pedestrian 36in mower, spray linemarker, tractor with sprayer/spreader and a vertidrain.

Each day, a collection of local workers would be waiting at Ferrovial training ground. Working with the local men and women of all ages gave me an insight into the lives of the local people. I was privileged to be accommodated in a villa with cooks, cleaners, drivers and security guards. Many of the locals live in shacks with no water or electric. The women generally work harder than the men, but are paid less. I did not want to upset that theory, so ensured I did not break sweat for the duration!

Working with the locals at times was inspirational, and you do find yourself taking a step out of the 9-5 and considering how we live our lives. The locals offered me a new title and I was now, officially, Mr. Chris.

The final game finished with a penalty shoot-out and, from a football perspective, that's about as exciting as it got. The standard of football was disappointing, especially when you consider the quality of some of the players in the tournament. The crowds, although not high in numbers, were high in spirits and a real sense of Africa was felt inside the stadium.

I appreciate that this report does not contain much grass science or technical data, but hope it offers an insight into my experience working in Angola.