Independent trials show that Interface® with StressgardTM Formulation Technology from Bayer, is the most effective treatment for Microdochium patch (Microdochium nivale) commonly referred to as Fusarium patch when tested against other leading brands. 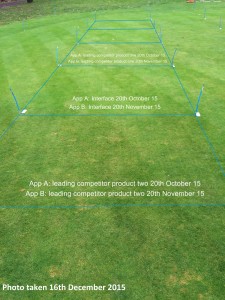 Tests run by the field trials specialists FieldArm, show that Interface® is more effective when treating against Microdochium patch than other leading brands, because not only does it ward off the disease successfully after two applications, but turf quality and colour are markedly better than the control areas and turf plots treated with the other fungicides.

"The trial was conducted at Thetford Golf Club, East Anglia, using 10 different commercially available turf fungicides and an untreated control in a 'randomised complete block' design with four replications of small plots, to ensure that treatments were made to a fair and random selection across the golf green. In doing this, any influencing factors are eliminated that might interfere with the data in order to accurately interpret the performance of each treatment," says Peter Duncan, director at FieldArm Ltd.

"I'm an independent trialist working for a contract research organisation, and I'm happy to say from the data obtained at this trial it's clear that Interface® has overall performed the best in terms of disease control, colour and turf quality," says Peter.

"The trial was specifically designed to investigate a range of products and most of the current leading fungicides were compared. It's not often you have such a broad range test," says Peter.

"The first application was made when we initially saw 1-3% onset of the Fusarium, on October 20, 2015. So effectively we made an early curative application, which is a typical strategy by greenkeepers for the control of Fusarium. We then made a (mostly) repeat application of treatments one month later on November 20 in line with common practice, with Fusarium in the untreated at a mean infected leaf area of 21%.

"We tested the turf every 14 days until January, and Interface® achieved 98-100% control until the end of December. While a couple of the other leading fungicide brands also achieved near complete control in the same period, Interface® stood out from the rest in terms of turf health and colour, sward thickness plus absence of disease, and by the time we reached mid-January many of the other products tested had virtually broken down with little or no control left, in comparison to Interface® which still was showing more than 90% control of Fusarium," adds Peter.

Paul Gould, course manager at Thetford Golf Club was surprised by the trial results. "There were a handful of products that also gave complete control, but when it came to turf quality and visual merit, Interface® was streets ahead, and this could be seen from a distance.

"It's one of the best trials I've been involved with, because it tested leading products side by side, and the difference was easy to see. Some well-known brands had a discernible lack of control.

"I hadn't used it in the past, but I now have Interface® in stock for the coming season," says Paul.

According to Colin Mumford, technical manager from Bayer, one of the reasons for the visibly healthier turf is that Interface® with StressgardTM Formulation Technology actually promotes plant health, as well as protecting turf against disease. "The green colour can be attributed to the product's ability to enhance chlorophyll in the leaf, and therefore increase the rate of photosynthesis. We're extremely happy with the results, and having visited the test site, when I first approached the trial area, I hoped that the healthier plots were Interface®, because the turf health was notably identifiable in some - and it turned out they were," adds Colin.