Swan Golf Design (SGD) has a long history of working with golf clubs in the UK, Ireland and continental Europe, helping to bring their courses into the modern golfing era.

Although each course is unique and demands an individual approach from us, there are always similarities between the projects. One of our greatest challenges is to maintain our focus on each course's individuality, and not to fall into the trap of implementing "one size fits all" design solutions.

A major factor in our ability to recognise and embrace the differences between the courses we work on has always been our experiences from projects all around the world. Whilst it may be difficult to formulate individual approaches to two courses that are only twenty miles apart, the differences between a renovation project in Surrey and a new build project in northern Brazil hit you right in the face!

And it has been, particularly, our work in India over the past five years that has forced us to adopt the concept of a permanent revolution in our methods.

Unexpectedly, our first project in India was a renovation, not a new build. However, its scope was such that it encompassed all aspects of golf course design, with the exception of routing. Since we began this project in 2005 we have been involved in several projects that have added further to our experience in India, and these have taught us valuable lessons which we've been able to apply to renovation projects closer to home.

When we set out for India, we were well prepared for the more obvious differences from the UK golf development industry we would encounter. The climate was always going to be a driving factor in these differences, and we knew we'd be looking towards specifying warm-season grasses and a greater irrigations capacity than we would back home.

As we carried out more research, we found that a high drainage capacity was necessary, because 90% of the annual rainfall is squashed into just three months. As we've been finding out, over the last few weeks, the UK isn't geared for this amount of water arriving over a short period, but we've had to make sure that we weren't under specifying the drainage system.

The construction process itself is completely unrecognisable to the ones in Western Europe, predominantly because of India's relationship between cost of labour and cost of machinery, which is skewed heavily towards labour.

Therefore, instead of overseeing a construction team of ten to fifteen people, and a similar number of machines, the site is absolutely full of labourers carrying out handwork with just a few machines carrying out the heavy earthworks.

On our first project, the renovation of Karnataka Golf Association, every metre of the very intensive drainage system was dug by hand, with all pipe laid by hand, and the backfilling carried out by hand. Equally impressive was the grassing effort, which saw every sprig of grass across the 46 hectare project planted by hand. Another departure from the norm was that the construction team labour included a high proportion of female workers, which is in complete contrast to UK construction projects, which are usually dominated by males.

As well as the predominance of labour on site, we have learned to deal with limited access to construction materials that are readily available at home. Some of the most difficult items to source are drainage materials. 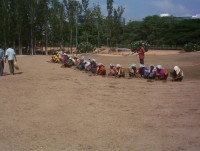 In civil works, Indian drainage systems tend to be on a very large scale and, usually, use concrete to move water around. In the golf industry, we are much more used to using PVC pipes, but these are not easily obtained in India, so we have to work much harder to ensure that our specifications are met. For example, in the UK we would specify 80mm diameter pipe for lateral drains in greens and tees, connected to 100mm diameter mains and 150mm diameter outfalls.

However, in India we have found it impossible to source 80mm diameter perforated pipe domestically, and equally difficult to find 150mm pipe. Of course, it is possible to import these materials, but that increases the costs hugely. So, it is more efficient to change the specification so that we achieve the same results, but by using only locally sourced materials.

In such circumstances, this extra work is easily offset by the reduction in construction costs and the environmental benefits of not having to cart the necessary materials half way across the world. Sourcing has led us to using alternative forms of organic matter, such as coco peat or the imaginatively named 'Dynamic Lifter' - which is actually just chicken waste! Often, the client or contractor has had to become their own materials supplier, as no other alternatives existed. Such was the case when sourcing sand for the rootzone at KGA, where dredging a local river was the only way to get the sand which matched the specification.

Several of the projects we've been working on in India have shared a difficulty we've found elsewhere in the world; that of trying to put together large sites from small plots of land with many different owners. Often, this means complex negotiations for our clients, and usually involves changing the golf course layout halfway through the project.

On more than one occasion, we have had to reroute the course after construction has started, and have now learned that, even land owned by the government, does not make for an easy ride, as the problem of ownership is simply replaced by problems with the tenant farmers, who are not aware that the land they work on has been sold!

Thankfully, the farmers are usually compensated for their loss and, usually, end up becoming involved in the project as well.

But, it's not just things that are directly related to the project that have opened our eyes. It has been the cultural differences between India and the UK that have had such an impact on our work. This has included the permitting process which, in some ways, is simpler due to less well developed environmental legislation but, in other ways, more difficult due to India's keen embracing of bureaucracy.

This is largely due to the energy and enthusiasm which appears to pervade the population. For many, golf course construction is not something that they have come across before. In fact, for a lot of the labour, golf is not even something they have heard of!

This can cause some difficulties. Those charged with building the greens do not know what greens are, or what characteristics they require. Bunkers are a mystery, as is the need to provide flat surfaces for tees.

However, problems such as these are usually overcome by an amazing willingness to learn, and subsequent effort when there is an understanding of what is required.

From our experience, given clear instructions and good management, any project can be successfully completed, even if much of the workforce was previously unskilled. And, once these skills have been learned and tested in the field, they can be used again and again across the project, and indeed on other projects.

SGD has embraced this idea of learning and, through our FirstGolf concept, has set about providing a formal framework to help build a skilled workforce for the growing golf industry. This has included the design of two beginner golf facilities, which will not only provide a training ground for India's future golfers, but will also provide formal training in golf course construction and maintenance, golf facility management, as well as other golf related skills. 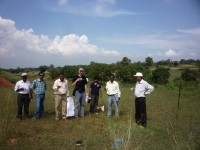 The two FirstGolf centres are currently under construction in Karnataka and, in partnership with public and private institutions, we are looking to roll out the concept across the country.

There is a huge opportunity for golf in India. Whilst the game may be nowhere near as popular as cricket, there is no reason why the game cannot become more accessible, enabling golf to become the second sport of the world's second most populous country.

We have been privileged to have worked in India over the past few years, and to have contributed to the modern day development of the game. Conducting business there has been hard work at times, but our experiences have helped us improve how SGD works and resulted in us providing a better service to our clients from closer to home.