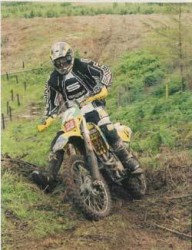 Nickerson Top Green, Tarmac Topsport and turf growers Inturf are all sponsoring the head of Wigginton based Seward Turf Maintenance who is set to compete in the International Six Days Enduro (ISDE). The event, which this year is held in Kielce, north of Krakow in Poland, from the 13th to the 18th of the month sees motorcyclists from all over the world, testing their skills, strength and powers of endurance against the clock, the terrain and each other.

"You're really pitting yourself against yourself, always racing against your previous best time," says Seward, just back from a two-day enduro in Wales. As one of a three man riding team representing North Riding Enduro Club in Yorkshire, he will not only be expected to cover 130 to 140 kilometres each day of the six day competition, but also attend to his own motorbike servicing.

"We're allowed a maximum time of ten minutes at the end of each day's riding to change tyres, oil, air filter and brake pads. I've just had a practice and managed to change a wheel in nine. We took part in a two-day enduro in Poland two months ago, just to get acclimatised, and we all rode in the European Championships in France and Italy last year, but this is the ultimate test. Nothing else comes close," he says. "I'm just hoping to finish!"