A greenkeeper based at gWest, Perthshire, Scotland, has become the first turf manager ever to hold a hat trick of top industry qualifications accredited by three worldwide greenkeeping bodies. 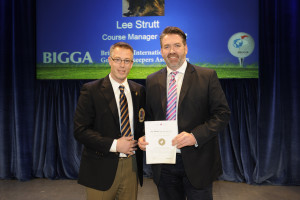 Lee was presented with his MS designation by Christian Pilon, President of the CGSA, during the Welcome Celebration at BTME 2015 - the renowned industry show for turf managers organised by BIGGA and held annually in Harrogate.

The greenkeeper, who is now officially Lee Strutt PGdip, MG, AGS, CGCS, MS, said: "I feel very privileged to become the first greenkeeper to achieve all three designations, and proud of the fact that I represent the UK and BIGGA as the first member to do this. Knowing I would be breaking new ground was a real motivator.

"The MS was very intense; to try and focus on a whole range of subjects from agronomy to management for the exam with the added pressure of having to answer 300 questions in six hours, effectively one every 90 seconds.

"Without a doubt, I have gained so much both professionally and personally from this fantastic industry, learning from my peers and seeing so many people who have had an influence on my career at BTME 2015.

"My inspiration and drive came from one focal point in my life. Whilst at secondary school I was told publicly by my form tutor that 'I would never amount to anything'. This made me very determined to achieve something!"

Lee also obtained the GCSAA's, Certified Golf Course Superintendent (CGCS) in 2014. His knowledge, skills and abilities were validated through the development of a portfolio consisting of his responses to skill statements, case studies and submission of work samples.
Two GCSAA certified superintendents also carried out an on-site inspection of gWest, this was followed by a six-hour exam covering every conceivable aspect of greenkeeping and management.

Firstly the candidate must acquire 200 of BIGGA's Continuing Professional Development Credits, then an on-course inspection takes place under the gaze of two Master Greenkeepers - similar to the GCSAA award. The third stage involves a case study and technical examination.
Lee began his agronomic career as a trainee greenkeeper at Bath Golf Club in 1984, then enjoyed spells at Broadstone Golf Club, Knighton Heath Golf Club and The Dudsbury Golf Club - where he secured his first Deputy Course Manager role.

In 1994 he moved to The Richmond Golf Club before being made Course Manager in 1997. He became the construction and grow-in Superintendent at gWest in 2008.

He's studied Sports Turf Management at Merrist Wood College, followed by a Post Graduate Diploma in Sports Turf Technology at Cranfield University. He was also part of the volunteer greenkeeper support teams at the 2012 and 2014 Ryder Cups, and has also worked at several other tournaments including European Tour events and Scottish Opens.

Lee has a handicap of 14, and is particularly passionate about greenkeeper education. He is heavily involved in several of BIGGA's continuing professional development initiatives. He was the instigator of the popular 'So You Want to be Promoted' seminar, regularly presents at Continue to Learn at BTME and is a mentor for the Future Turf Managers Initiative educational event supported by Jacobsen.

BIGGA CEO Jim Croxton said: "I'd like to congratulate Lee on a great achievement, we're all very proud that a very active BIGGA member is the first greenkeeper to ever obtain these three awards.