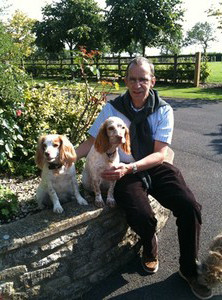 Peter Rochford, founder of Rochford Garden Machinery, one of the UK's foremost distributors and retail dealerships, died peacefully on Friday 5 July at St Margaret's Hospice in Yeovil, surrounded by his family. He was 57 and leaves wife, Dibby, son Mark and daughter Kerry.

Peter was diagnosed with cancer in May 2012, and had been undergoing intensive treatment during the past 12 months. Despite his illness, he continued to take an active interest and role in the business, which will continue to be run by MD Stewart Anderson, Dibby, Mark and Kerry.

Peter started in the grasscare business working first for his father, Rocky, who founded a successful landscape business which was notable for supplying millions of trees for the UK's motorway system. In the late 1970s, Peter started Rochford Garden Machinery, initially operating out of a converted pub urinal in Bruton, Somerset. A retail shop in Bruton soon followed before a move into a premises in Wincanton as the business grew.

The company took on the John Deere franchise, and expanded the distribution business which meant even more pressure on the Wincanton premises. In 2007 the company built it's present headquarters on the Wincanton Business Park to accomodate the rapidly growing business which by then also included the UK distribution rights for AL-KO as well as it's own brand Mitox and other exclusive lines.

Aside from business, Peter was an avid motorsports competitor and keen cyclist. In 2005, he founded a charity, the Wincanton Recreational Trust, to provide sports and leisure facilities for young people and local residents on a 50 acre site comprising football pitches, tennis, bowls and modern changing facilities.

In a tribute, Mark and Kerry Rochford said "Dad fought his battle with cancer with strength and bravery. Not even his illness could hold him back from his Sunday cycle bike ride in the nearby woods sometimes for up to 40 miles! This was all due to his sheer determination that remained with him right through to his last days.

"As a family we are so incredibly proud of his achievements and feel privileged to continue working and grow the legacy that he leaves behind.. We have been overwhelmed by the love, support and comfort from people near and afar and are so grateful of this"