St James Park has been a home to football in Newcastle since 1880. In that time the stadium, as well as the teams playing there, have gone through a number of transformations. Overseeing the club properties for the last 17 years has been Facilities Manager Eddie Rutherford, who in 2017 upgraded the fleet of stadium pitch mowers to include three 34" Cub Cadet INFINICUT® machines. Although renowned for their green credentials, it was ultimately the superior quality of cut that saw the mowers become the most recent additions to 'The Magpies'. 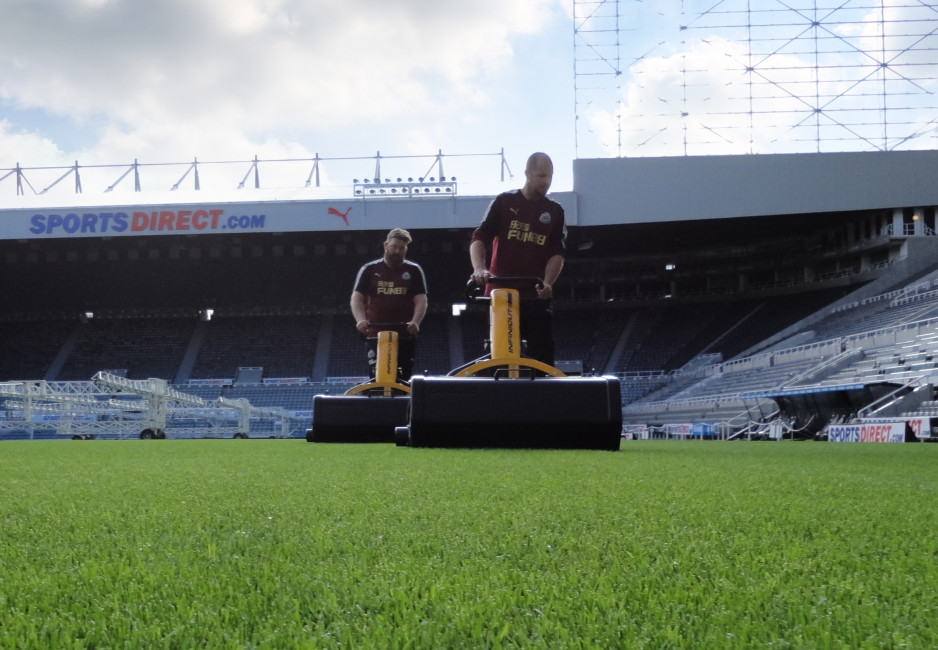 "I'd heard and read a lot about the Cub Cadet INFINICUT® mowers in the trade magazines so got in touch with Vinny Tarbox for a demonstration, and straight from the off we weren't disappointed" explains Eddie. Over the last 5 years, Eddie has been driving a campaign to improve the green footprint of the club, which has seen lots of improvements around the stadium. "We're running the mowers purely on battery power which, more than just delivering cost savings, means we're running on clean, green energy compared to petrol alternatives - battery power seems to be the way forward for the industry."

In addition to putting a big tick in the 'environmentally friendly' box, the quality of cut produced sealed the deal. "It was important for us to invest in machines that deliver the best and with the Cub Cadet INFINICUT® the cut you get is second to none."

The unique design and its adaptability to perform on any grass surface makes the INFINICUT® the most technologically advanced mower available to turf managers in the last 40 years. With a dynamic return floating head, variable cut rate, and flexible setup, the INFINICUT®, together with ATT SMARTCut™ cassette, ensures a healthy turf and provides precise adjustment to deliver an exacting quality of cut.

Final word from Eddie, "Compared to the results we were getting from the previous mowers, the guys have noticed an increase in the quality of cut and finish by at least 25%. It's when you think about all the years there have been lawnmowers, all performing at a similar level, then this one comes along and it's that much different - it really is impressive."