1 Innovative parts board for the workshop

It occurred to me while searching for a topic to submit to Pitchcare (it gets harder as I get older, not sure why) that our latest little "project" in the workshop might just be ideal (ideal in that it's very short, see how I think of you).

Each winter I try to identify something that we need in the workshop that can be fabricated by the technicians, they are encouraged to come up with ideas of their own that are both practical and cheap. This year a welding screen was suggested by Martin (AKA. MARTINNNNNNNNNNNNNNNNN), something we need and nice and cheap, ideal. Since there is very little wall space in the workshop that is not taken up with air ducts, electric conduits, switches, sockets, isolators, fire alarm sounders, break glass stations, H & S posters and Oh! Nearly forgot windows, there is not much left for putting up shelves for spare parts.

That wall which was left over and used for parts was getting rather crowded and untidy looking so the idea of a "parts board" was born.
This is not very original on my part because I spent some time in the aircraft business (in my youth, which is nearly beyond living memory) and this type of thing was used to accommodate hand tools in the form of a shadow board. The idea is that tools had their outline painted on the board together with a series of hooks/nails to hang the tools on, if a tool was missing it could be easily seen to be missing and had to be found before anyone went home; loose objects/lost hand tools + aircraft = possible disaster! 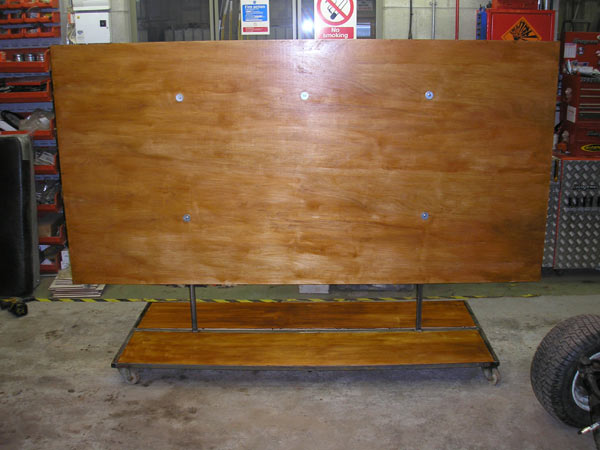 On castor wheels it can be wheeled out of the way when not being used or wheeled in the way if the welder is being used, double use, can't fault it.

Chris (AKA CHRIIIIIIIIIIIIIIIIIS) is charged with project design and made some sketches, these were put through the shredder immediately as an act of encouragement on my part to do better, much better. No, just pulling Chris's leg, the sketches were fine and a final "tweaking" was discussed. All three technicians were involved in the build and a nice job they made of it, of course any glory was mine and I made that clear before manufacture began.

Simple in design and skeletal in construction it was very easy to make and took only a day in total hours from collecting materials to painting the product, wheels were "recycled" from a supermarket trolley, two bars of 25mm X 25mm mild steel box was purchased from our local steel stockist and two 8 X 4 ply-boards in 12mm was picked up from the local DIY shop. Other stuff such as nuts, bolts, washers, paint, sadolin wood treatment and 2 steel handles came from stock; Total cost in round figures was $200.00 As can be seen from the photographs it is (fairly) smart and very practical. For those with a smaller workshop there is no need to store parts where space is at a premium. All parts are seen easily and if they are stored with the part number adjacent to the part, replacements can be ordered without referring to the parts catalogue. We hang those awkward parts such as belts, cables and larger gaskets on the board, in the large bins below we store heavier items that will not fit in the bins mounted on wall brackets. Among these heavier items are PTO U/Js and yokes, sets of verti-cut blades, Club Car shock absorbers and the like. We also keep in stock many other items and the ones stored on the board (Miss Ford) have been selected because they are particularly difficult to store elsewhere.

You may see ways of improving on this, if so please let me know, or you may have an idea of your own so why not share it with others. Just contact Pitchcare with the idea and couple of pictures (they speak a thousand words) and they will judge it on merit and perhaps publish it.