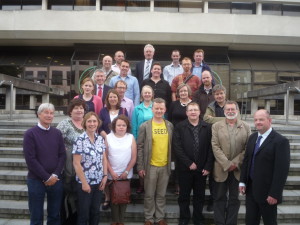 Dr Owen Doyle FI Hort, IoH Ireland Branch Chair said "Horticulture, which is the art, science, business and technology of plant cultivation for human use, is vital for human health and wellbeing, and as educationalists we should spread this message and convey the importance of horticulture for life on this planet"

The considerable interest in part-time horticulture educational programmes was clear and concern was expressed regarding the lack of funding for such students. Two Working Groups were established. The first to address the gaps in information about the horticulture industry in Ireland and a second group to work on horticulture advocacy to promote the profession and highlight the contribution that horticulture can make to the global issues of climate change, biodiversity, malnutrition and human wellbeing.

The Institute of Horticulture, which represents professional horticulturists in Great Britain and Ireland, was established in 1984 and currently has more than 1200 members, including student members.