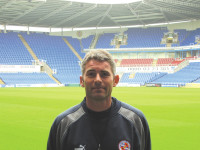 With over fifty professional fixtures each season Reading FC's Bruce Elliott was struggling to maintain a quality playing surface. Drastic measures were required. Bruce takes up the story.

Over the last few years at the Madejski Stadium, there has been a rapid decline in the performance of the playing surface. This has been highlighted more this season due to the increased media coverage that is attached to being in the Premiership.

The pitch was originally constructed in 1997 on top of an old land-fill site, and was a Fibre-sand surface that was later changed to Desso in 2001.

We are home to not only premiership fixtures, but also reserves and premiership rugby, giving us an average of around fifty professional fixtures each season. It was clear that, with this amount of fixtures, we were struggling to maintain a suitable surface for the standard of matches that were being played at the stadium.

One of the main problems we were facing was subsidence due to the construction of the site itself. We were also having drainage problems, which led to standing water and large areas of the playing surface becoming increasingly soft during prolonged periods of wet weather. This also resulted in us losing a large percentage of our grass coverage over these periods.

I sat down with our consultant, John Hacker from PSD, to discuss what we thought the problems were and how we could tackle them. We came to the conclusion that there were a number of issues that needed addressing.

Firstly, the root-zone seemed to have an uneven distribution of fine particles within it, with a lot of these particles finding their way to the surface and capping it off. The lower root-zone was also very compact and was slowing up percolation rates. The root-zone varied in depth acros 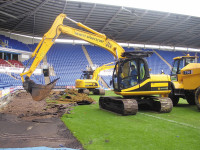 s the site which led to critical tension issues with the moisture not being able to freely drain away.

The first thing we did to address some of these problems was during last summers renovation period when we applied ten tonnes of Profile Greens from Rigby Taylor and one tonne of Trucal Calcium which we mixed into the upper root-zone.

During the season we increased our aeration programme and used a number of penetrative wetting agents and liquid aeration products.

Unfortunately, there was little we could do to resolve some of the other issues, such as the surface levels and root-zone depth; we have the Desso system which would have to be replaced if these were to be overcome.

Up to the end of last year the pitch seemed to be responding to some of the measures we had put in place but, as soon as we reached prolonged spells of 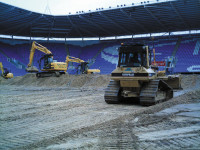 wet weather, the surface began to deteriorate. We continued to carry out the maintenance procedures we had decided upon, and even increased our aeration programme.

At the start of February we decided to try another option, which was to Dry-Ject the surface. This was an operation we knew had been carried out successfully at Southampton, Wolves and Blackburn. It involves using a pedestrian machine to drill kiln dried sand or other products directly into the soil profile. We applied 17 tonnes of kiln dried sand to the profile to increase the percolation rates. Unfortunately, we had limited success with the operation due to the poor condition of our root-zone and, in hindsight, we had perhaps tried this option too late in the season as a cure rather than prevention in the first instance.

Having tried various options to improve the surface with limited success, and also combined with the problems of surface levels and root-zone depths, I consulted my Stadium Manager, Ray Booth, and informed him that I felt the only course of action would be a full reconstruction of the pitch to enable us to present a suitable surface for the up-coming season. After discussion, this was agreed in principle with the Chief Executive, as we all felt that this would be the ideal time to carry out such an operation as the team had ensured Premiership survival for this season. t the club, especially the Stadium Manager whose unenviable task it is to present my requests to the Board. Our next task was to decide whether we needed to replace the entire profile of the pitch, including drainage and under soil heating, or just to replace the root-zone and Desso. After investigation of the drainage system using cameras, it was decided that the drainage was corrupted and that we could not take the risk of building a new profile on top of this system.

Once we had decided on our course of action we contacted Hewitt Sportsturf, not only because they hold the licence for Desso, but because I feel they are the best in the country at this type of operation having recently completed Wembley and the Emirates Stadium.

We met with John Hewitt and, after a series of discussions, agreed that the best way forward was to return the pitch and track to their original levels when the stadium was first constructed. This meant we could leave the existing drainage in place, making it defunct, as the new drainage layer would be above this level. It was also decided that we would engineer the drainage to steeper gradients to counteract any future subsidence. We would also install submersible pump chambers so that drainage would not have to rely on being gravity fed, but could be pumped from the system. It

was also agreed to put in upgraded pipework that would allow us to attach mobile Sub-air units in the future, to enable us to circulate air through the drainage system and into the profile.

Because of the relatively short time frame we had to do this work, we planned for the operation to be carried out so that one side of the pitch would be completed before the other; the Desso machines could make a start whilst the other side was being prepared. These two sides would then be married together to produce the finished surface.

Work began in earnest on the 14th May, with the machinery being delivered the day before. This consisted of two JCB 360s, one JCB front loader, one D5 bulldozer, three dumpers and a small JCB digger. First task was to remove the existing track and upper root-zone containing the Desso along the West stand side of the pitch, as this was the side we wanted to complete first. This also allowed the East stand side to be used as a storage area for machinery and materials. Next, we removed the existing under soil heating pipes which were cut up and removed from site in skips. More root-zone was then removed to obtain our sub-base level - in all there was around 300mm of root-zone removed. The lower root-zone was then compacted in various directions using a 12 tonne vibrating roller. The sub-base was then laser graded using the D5 to create the correct levels to work from.

Whilst this work was being carried out the new kerb edgings were being laid along the West stand and half of the North and South stands to give us our new pitch and track levels. The next task was to begin putting in the various pipework needed, which included the main carrier drain from our East to West stands and the laterals and main carrier drain for the West stand side of the pitch. These pipes were all on top of a Visqueen layer, an impervious membrane which will ensure that the air is maintained within the sand profile once we have our sub-air units running.

Once the pipes were in we began bringing in the gravel to form our drainage carpet. The gravel was laid to a depth of 150mm and used around 2,000 tonnes of material. After the gravel was graded we began laying out the new under soil heating pipes directly on top. These were set at 30cm centres and use approximately 19 miles of pipework. The new irrigation system was put in on the West side, which will eventually consist of fourteen Hunter G995 heads around the outside of the pitch and six Hunter I41 heads within the turf surface. We were now at the stage where we could begin bringing in the sand root-zone which will be graded to a depth of 300mm. This is specially blended for Hewitt sportsturf to achieve the most desirable root-zone. We will eventually have used over 4,000 tonnes of sand into which will then be mixed around 100 tonnes of a soil root-zone, containing Fytozone, to give us a 97% sand profile.

This will then be constantly laser graded to achieve the desired levels. All of these operations will then be replicated on the East side of the pitch until we are at a point where we can marry the two sides together. We currently have a provisional date of 18th June for Desso to begin work on one side of the pitch, which we are very optimistic of achieving, especially with the excellent and very well organised team Hewitt's have in place here.

Whilst Desso are working on the surface we will carry on with the work required on the new track. The pitch should be ready for seeding around the beginning of July which will give us about six weeks of growing in time to be ready for the start of the new season on 11th August.

As I write this article we have begun work on the East side of the pitch where we have dug through an old carrier drain and lateral which we have found to be approximately 90% clogged up with silt, which justifies our decision to install new drainage.

Part two of the Reading renovations will be posted on this site soon.