"The quality of the green surface is fundamental to whether it is in my hands, or whether Zeus decides it is good or not"

I only play outdoor lawn bowls, choosing not to play the indoor format of the game. There is nothing better than playing in sunshine, on a wonderful village green in good company. However, as an international player, I also enjoy the competitive nature of the game, and hope for certain things from a bowling green before I start to play and during the match.

With many bowling greens now being maintained by willing and committed members of the bowling club, the day of the highly paid greenkeeper seems to have ended. The efforts made to maintain the greens are much appreciated, but it has to be said that there has been a decline of lawn bowls playing surfaces, certainly in the fourteen years I have been playing.

So, before I go and play on a bowling surface, what would I hope for?
- A consistent line
- A consistent pace
- Green near as dammit all one colour
- Grass not too long
- Ditches level or even raised slightly
- Flat surface Consistent Line: Unlike many bowlers who like (and seem to expect) perfection, I am more than at home on a 'tricky' surface. When I first started playing, I used to play at a club which had a few issues with the surface and, so, became accustomed to 'digging in' during a match, and being patient with the green.

My current club, New Lount Bowling Club in Leicestershire, is unarguably the best playing surface in the county and, quite possibly, the country. Drawing with a wide arc, with the green playing at a good pace, and with a dedicated team of about eight people working on the green, ensures the surface is in 'tip top' condition.

However, when I say 'consistent line,' I do not mean that I expect, or even want, every surface to be really fast and take 'lots of green', meaning I have to push my bowls out wider so they will come back to the centre. I am quite content playing on a rink where you bowl 'up the middle', barely taking any bias whatsoever, finishing on the correct line to the jack. As long as this line is consistent, I am content.

For instance, many greens are tricky because you put one bowl down and it finishes in a certain place, and then you put your next bowl down exactly the same, and you expect it to take the identical path to your last bowl, only to see it finish in a completely different place. These are the worst surfaces! You may as well toss a coin at the start of the match and the winner of the toss claims the game.

Consistent Pace: As odd as this sounds, many outdoor greens do not have a consistent pace! I am mainly referring to when the green has become scorched in patches and brown. This usually happens when it has been hot, and the area has not been watered (though it is very rarely hot!). But, I have also played on greens where grass has been burnt by overly concentrated fertiliser. This, once again, harks back to the fact many greens are now maintained by passionate club members - amateurs at turf management, rather than trained professionals who, inevitably, cost a lot of money to hire for clubs.

Here's a scenario: you think your bowl is perfect on the lightning fast surface - you are about to draw shot to win the game and you see your bowl 'stick' in a lush and overgrown green patch five yards away from the jack, and it pretty much stops your bowl dead. You have not won the match, you have just lost it! Or, alternatively, you have drawn the shot, you celebrate, but wait ... your bowl is still trickling on that bare brown patch, and it carries on running a yard and out of the head! It is very frustrating when either of these scenarios occur, and they can alter the course of the game dramatically and, therefore, as an international bowler, this is a type of surface I tend to dread rather than relish. Green All One Colour: This correlates with the aforementioned description of a 'consistent pace'. If the green is all one colour, a bowler can be relatively assured that the surface will, at least, be consistent with regards to pace. You can never be positive about the line being consistent until you get on the green and play.

I prefer not to see the grass too green, as this usually suggests that the greenkeeper is more obsessed with how the green looks than how it plays. It is more than likely that the green has been over-watered, and that the greenkeeper is panicking too much about the surface turning too brown, which is a real shame, as there is nothing wrong with a brown surface. Not mentioning any names, our club has, in the past, had problems with one volunteer coming down to water the green because he liked the surface slow. Not only was the act very selfish, it also meant that we had an influx of moss as it thrives in the moist conditions.

I have seen bowling greens that are brown all over. This is very rare now, as greenkeepers are scared of their greens becoming scorched and, therefore, apply a 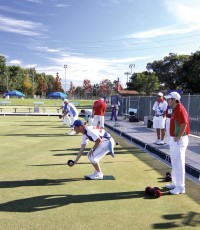 plethora of water to the greens. However, when I have seen bare, brown greens - usually because the watering system has broken - I have not been despondent before playing. As long as it is consistently brown, I see no need to worry when looking at the surface.

Grass Not Too Long: Looking at the colour of the green, and deciding what pace the surface will be before putting a bowl down, is not a foolproof way of determining green pace; I have played on some very lush greens before and, to my surprise, they have been lightning fast - my own club's green included. However, this is because the green has been cut short, so there is less grass on the green, giving it a flatter trajectory and, therefore, making the pace faster.

Many council greens will only be cut once or twice a week at most and, if you see long grass, you can be certain that the green will be slow. Now, I actually like slow surfaces, bucking the trend of most international players, which is probably one reason why Bowls England select me - they know they can rely on me on the slower surfaces. However, it is nice for a green to have some pace to it but, if you see grass half an inch thick, you know you need to do a half hour warm-up session so you do not have to go to A&E later with a dislocated shoulder!

I have only been tricked once by long grass being quicker than expected. I played for England in Hong Kong, and when I saw the green I was in shock. They use a different type of grass in Hong Kong - more akin to a weed and much longer. My first bowl during a practise session saw me get my arm above my head, release the bowl and see it fly into the ditch as the surface was ridiculously quicker than I expected - it was really fast!

However, this is the only instance in my fourteen years of playing that I have been deceived, and it was the other side of the world. The weed was long but lay flat, rather than typical grass that tends to stand upright, meaning the bowl sticks to the grass on normal greens as there is more friction.

Ditches Level or Even Raised Slightly: Greenkeepers struggle to keep ditches level, and a poorly maintained ditch can be the difference between success and failure for all bowlers; in particular those that play at an international standard. I have played on surfaces where the slope begins more than two yards from the ditch, and keeping your bowl on the green without hitting something in this two yards is literally impossible!

Bowlers do not help themselves as they continually stand or even sit on the edge of the ditches, creating more problems for the greenkeeper. A top quality bowler would always be pleased to see a level ditch, or one that is even slightly raised to ensure your bowl does not unfairly go into the ditch. Flat Surface: Finally, as I play flat lawn bowls and not crown green, I like the surface to be flat. I once played on a green in Lincolnshire which looked more like a crown green surface with humps in it. You could literally see the green slope up and down. We were on an end rink, and the side of the green was next to a bit of grass and a hedge which encircled the green, and there was no real side ditch for the bowl to stop in. The jack was moved out to the edge of the rink and my skip drew what looked like a good bowl, only to see it slope not only into the side ditch but, because there was not really a side ditch, it went onto the grass and into the hedge - this was a slow draw shot and the slope had altered its course that much! As humourous as this was, we lost the game and the surface was not really playable.

My bowling green that I play at slopes down ever so slightly (our club secret, please do not share it), but it is consistent - there are no humps and hollows, just a gradual decline from one end to the other, and this is perfectly playable. It is when the green is uneven throughout the surface that alarm bells will ring for an international player. In conclusion, consistency is key! I do not mind slow surfaces, I do not mind tricky surfaces - in fact, I enjoy them, as I know they rile many bowlers and I feel that gives me an advantage. The green can be as tricky as it likes - as long as it does the same thing time after time, I am not fussed.

Ultimately, I want to know, when it leaves my hand, that that bowl has a chance. If I delivered it well, and it felt good out of my hand for how the rink is playing, I hope and expect it to be somewhere near the jack. In this respect, I feel it is in my hands to make the shot, not in the lap of the gods. The quality of the green surface is fundamental to whether it is in my hands, or whether Zeus decides it is good or not.

In addition to being an England International, Patrick Hulbert is also the editor of Bowls International magazine.