The Scoop on Perennial Ryegrass 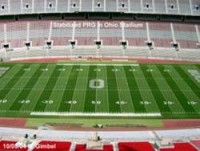 A summary of PRG advantages are - it has a wide range of soil adaptability, great wear tolerance, good quality/colour, can be mown at heights conducive to ball sports, such as cricket, field hockey and soccer, does not produce excessive thatch, good resistance to insect pests, and most importantly germinates and establishes quickly - very advantageous for the sports turf industry where windows to renovate turf are small.

On the flip-side, PRG does have it's disadvantages - it has a poor recuperative potential compared to rhizomatous grasses such as Kentucky bluegrass and Bermuda grass, it has moderate-low resistance to winter kill in colder climates, it is susceptible to a whole range of turf diseases (rust, red thread, fusarium patch, leaf spot, grey leaf spot, dollar spot, brown patch - you name it, it gets it!), in summer PRG will go dormant without irrigation, and it will not tolerate extreme heat or drought.

With all of these points in mind, plant breeders such as Seed Research of Oregon in the US, or The Institute of Grassland and Environmental Research in the UK have been developing PRG cultivars that address some of these issues. Improved PRG cultivars that have greater stress tolerance and improved disease tolerance are on the market. Those cultivars that perform the best are listed on the NTEP web-site and on several University Extension Service web-sites, such as Rutgers.

At OSU, we are performing establishment rate and wear tolerance research on many perennial ryegrass cultivars such as Nexus, Barlennium, Aberelf, and SR4200. To date, these cultivars have performed well and have also displayed good recuperative potential through strong tillering. We are also looking at some of the more rapid establishers - the transitional ryegrasses (cross between perennial and annual ryegrass) such as TransEze and turf-type annual ryegrasses such as Panterra (see picture left). Research on these grasses is still in the early stages but several sports field managers have already been using them as over-seeding tools in the fall because of their rapid establishment.

This article has been printed with kind permission from Pam Sherratt of Ohio State University. Her Sports Notes pages are found at http://hcs.osu.edu:16080/sportsturf/