Manchester United grounds manager Tony Sinclair picked up several awards last season, including Grounds Team of the Year. He and his colleagues have since been hard at work on the pitch at Old Trafford this summer, getting it ready for the start of another busy campaign in early August... 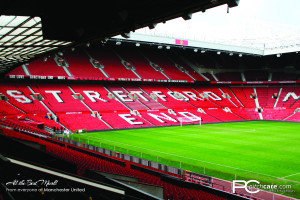 Can you tell us a bit about your role at Old Trafford?

I'm grounds manager, meaning I'm responsible for every site we have, including Old Trafford, the Aon Training Complex, Littleton Road and the Cliff. We have guys who are designated to look after each location, but I'm responsible for overseeing everything that goes on at each site. We would say as groundsmen that the pitch is the most vital tool for the team - it's what they play on. If the training ground or stadium pitches aren't right, it will have a big effect on the players and how they perform. Sir Alex Ferguson also used to describe the pitch as a vital tool, and he was right!

In April, your team were joint winners, with Arsenal, of the Premier League Grounds Team of the Season award for 2014/15. Was it nice to have your hard work recognised?

It was fantastic. We also did really well at the Institute of Groundsmanship awards last December when we won Team of the Year and I won Groundsman of the Year. That's testament to all the hard work that the lads put in. I'm lucky to have a good team behind me and the technology we use nowadays helps us work to our maximum level.

The new season isn't too far away now, so is work on the Old Trafford pitch going to plan?

Well, we played Arsenal here on 17 May and then the last time the pitch was used was for the Legends Are Back game on 14 June. We're now around six weeks away from playing Spurs at Old Trafford and the pitch is currently bare with seed on - that's a frightening thing to say, especially because the weather is so temperamental around these parts! But I'm sure the pitch will be fine by the time the first game comes around. It's a natural process and we'll do everything we can on a daily basis to help it along.

Do you have regular dialogue with the manager about his requirements for the pitch?

Manchester United as a club have always backed the ideas that we put forward. Anything we've needed, they've been right behind it 100 per cent because they recognise the importance of it. The managers over the years have been absolutely amazing. What we've got out there is a plant and, if you push that plant too far, it will die. That's why dialogue with the manager is absolutely crucial - Sir Alex was fantastic and the same can be said of David Moyes and of Louis van Gaal.

How much has the craft of groundsmanship changed during your career?

There has been an incredible surge in technology over the last 10 years. For example, there are the lights we use to stimulate growth by providing artificial sunlight. They were developed by a man in Holland who used them in his greenhouse to grow roses and was able to maintain their growth at the same rate through the winter. Those lights have been essential for us as during the winter months we have a microclimate in the stadium due to the surroundings.

Finally, United fans dream about walking down the tunnel and onto the hallowed turf, but you get to do it every day! How does that feel, especially for a fan like yourself?

I've been here 24 years and I'll look forward coming in tomorrow more than today, and more than yesterday. I can honestly sit here and say that I have never felt any other way. It's such a challenging yet rewarding job and we're so fortunate that everyone sees the results of our work. Old Trafford is the most visible pitch in the world. It's a fantastic thing that everyone sees what we do.