0 Our man in Brazil 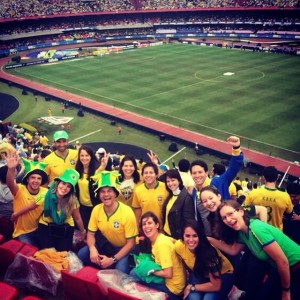 After arriving in Brazil at the end of May I've been visiting my girlfriend in Sao Paulo and now will do some travelling around the country during the time the World Cup is taking place.

The plan after Sao Paulo is to travel up to Recife, then to Fortaleza in the sweltering north of the country and back down to Curitiba and then Rio de Janeiro around about the time of the final on July 13th. I'll hopefully be visiting the hosting stadiums in a couple of these cities to speak with the groundsmen there.

Having done several seasons as a greenkeeper at Hauger Golf Club in Norway, I do have some practical horticultural knowledge though I don't profess to be an expert by any stretch of the imagination. I do enjoy getting stuck in, observing the atmosphere, talking to people and getting their stories though.

There is a sense of expectation here in Brazil and many favour their national side for the cup. Perhaps they don't have the technically best team, but the momentum gathered in the past year or so and fervour of the crowds could propel Brazil to its first World Cup trophy on home soil.

The one other time Brazil hosted the tournament was in 1950. They were outplayed in the final by Uruguay on that occasion and, although I've only been in the country a few weeks, have discovered this still can be a sensitive topic here.

All eyes will be on the new Sao Paulo stadium and pitch from the very beginning as it hosts the Brazil - Croatia opener on June 12th.

A match to test these stadium facilities and pitch went ahead on Sunday 1st June. It was a game between local club Corinthians and Botafogo on the final day of the Brazilian top-league Serie A season before a break for the World Cup. One stand was closed and another half-filled as they hadn't been safety-checked, but the atmosphere was electric and the mood positive. 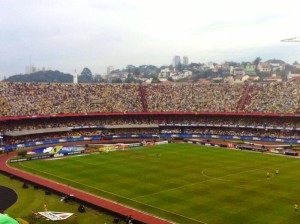 This is also the stadium where England will play their group match against Uruguay on June 19th.

The queuing system was pretty chaotic, but inside it was all good the pitch looked to be coming along nicely - and once the remaining temporary stands have passed their safety checks, this might be the best stadium in Brazil.

Apparently it is the classic Brazilian way to leave things to the last minute and you could say having two of the hosting stadiums still unfinished a week before the World Cup start falls into this category. That Sao Paulo's Metro transport system is on strike and threatens further action during the tournament is of much more concern. The knock on effect has created traffic gridlock and there are simply not enough buses to cram people into.

There are problems, yes, but I keep reminding myself one thing.

This is Brazil. Let's watch some football.

Up and coming matches :-