David, who has been working on a temporary basis over the summer at Inturf's York based production nursery, will now be looking after the Company's sales in the north and assisting with larger scale installation projects when necessary.

David Hugill follows Simon King onto the sales team after Simon joined sales a year ago last September. Simon is responsible for the east coast and midlands areas for the Company.

Inturf have been rapidly expanding their operation, especially in the Custom Grown Turf market which has taken off in recent years, and it was important to keep up with the momentum 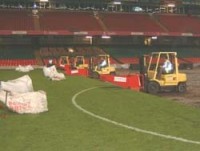 Fibre Reinforced Turf (rootzone mixed with 30 mm polypropylene fibres exclusively obtained from Mansfield Sand Company Limited) is one of their latest custom grown stockable items. This material is extremely hard wearing and is ideal for applications such as football and rugby grounds, race courses, cricket outfields, leisure areas (parks etc), fire access points around offices and for high wear lawns, plus a whole host of other applications where a stable, durable grass surface is required.

Inturf have currently around 90,000 square metres (9 hectares) of Fibre Reinforced Rootzone Turf growing at both its nurseries in the east of England, most of this material having been ordered in advance for winter repair work and for new installations next summer.

Another growing area for business at Inturf is in the golf green refurbishment market and this year Inturf have supplied more greens turf than ever to some very high profile golf courses.

Next year's order book is filling up fast with the ongoing work at some of the clubs they have been working at in 2003 and with new projects waiting to start subject to weather, the Company will have the equivalent of five hectares of quality Custom Grown Turf for greens in the ground for 2004.

It is difficult to imagine but Inturf have over 20 different types of turf growing at any one time including standard turf production which is well known in the industry. 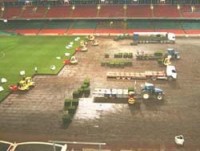 The Company has scored a number of 'firsts' in the industry, for example Big Roll, Turf Tiles, Modular Turf, Custom Grown Turf are just a few of the innovative turfgrass systems developed by Inturf. One particularly interesting 'first' happened recently when they were given the task of removing the pitch at the Millennium Stadium in Cardiff following the international soccer match between Wales and Russia. They were given 36 hours in which to remove the whole of the pitch in readiness for a supercross event. This procedure involved the cutting out and lifting and storing of 7240 modules each weighing half a tonne, a process which took Inturf just 191/2 hours - well within the deadline schedule. The pitch is scheduled to be returned to the Stadium in readiness for the Six Nations Championship some time towards the end of January next year.

Another project which was carried out by Inturf following a newsworthy item was the refurbishment of the grassed area underneath the David Blaine suspended glass cage spectacle that suffered enormous spectator damage during the 44 days that Mr Blaine was suspended. 4000 square metres of Inturf SS3 turf was installed by their own staff using the Big Roll laying system, a task that was undertaken and completed within four days.