Until some four or five years ago, few but the most dedicated botanists would have ever even heard of Japanese Knotweed, let alone be aware of the damage it could cause as the most deadly of non-native, invasive plants threatening Britain's rural landscape.

That is no longer the case. In the past couple of years, there has been a massively increased awareness of the problems caused by this, and similar plants, such as Giant Hogweed and Himalayan Balsam - not just amongst horticulturists or land managers, but also amongst the general public.

Some of the knotweed issues that have long plagued the construction industry, for example, its holding up of major regeneration projects or adding millions to development costs, are now starting to hit home at a domestic level.

More and more homeowners, for example, are being denied mortgages by banks and building societies because the properties they are trying to purchase have been affected by the invasive weed. In turn, sellers are spending thousands of pounds eradicating Japanese Knotweed from their land after finding their homes have become virtually unsellable."

As we'll discuss in the article, awareness may be greater, but few areas, rural or urban, commercial or domestic, are spared by the threat, as Britain continues to experience the environmental impact of the weed growth.

The problems with Japanese Knotweed are two-fold. Firstly, it is a prolific grower that has the ability to reproduce itself frequently and quickly. The plant grows in dense clumps up to three metres in height and with roots that can easily go a further two metres below the surface. Secondly, once established, it is almost impossible to completely remove or eradicate. Although it dies back each year, its ability to reproduce itself by rhizomes is the reason why the weed is so invasive and difficult to destroy. 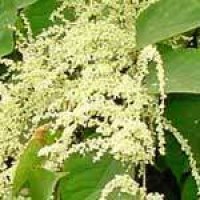 Furthermore, it is indiscriminate in where it grows, and can appear in the most inappropriate and high profile of locations. Take, for example, The Royal Parks in London, visited by over 7 million Londoners and tourists each year and extremely popular as a place of urban retreat and natural beauty.

At two of the parks, however, Regent's Park and Primrose Hill, parks management teams faced a daunting task with Japanese Knotweed infestations increasingly threatening hedge lines and high profile garden areas. By last year, some nineteen infestation sites had been identified in the 416 acre Regent's Park, as well as a large isolated stand in Primrose Hill, and it was recognised that action had to be taken.

After reviewing various treatment options and projects across London, it was decided that there were some methods, such as chemical spraying and 'dig and dump', that could immediately be ruled out as unsuitable. 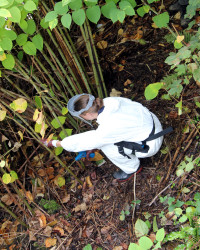 A technique that involves cutting the stem and removing the plant before pouring herbicide into the open cavity has achieved some good results elsewhere, but there are obvious problems with herbicide spillage, and dealing with viable plant fragments that can themselves exacerbate the problem. Knotweed only needs a tiny fragment of its underground rhizome, the size of a thumbnail, to survive and regenerate.

In the case of The Royal Parks, other traditional treatment methods appeared just as flawed. Chemical spraying can harm other plants and wildlife through drift spray or run-off, and is expensive and by no means 100% effective. Digging out the weed is equally expensive, must be repeated a number of times to remove any trace of roots or rhizomatous growth and must be disposed of as hazardous waste, filling valuable landfill sites with huge quantities of contaminated soil.

It was for these reasons that assistant parks manager, Andy Williams, was confident that the stem injection treatment offered the most suitable option for Regent's Park.

"The stem injection system injects a concentrate of glyphosate herbicide directly into each cane of the weed, achieving maximum control and specific to the plant species with no impact on the surrounding vegetation and environment. This was obviously a vital consideration here in the parks, because of the potential risk posed by traditional foliar spray applications to our plants and gardens."

The knotweed absorbs the glyphosate into the rhizome with a much faster absorbency rate than that of foliar spraying and, crucially, with much greater accuracy, ensuring it has no effect on the surrounding vegetation. Injection directly into the plant stem, using the specially developed 'applicator gun', means the method is unaffected by rain or wind, and can be applied in all weathers throughout the knotweed's growing season. 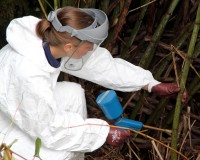 Stem injection results can be seen within two weeks as the weed starts to die and show visible signs of foliar decay, and this also enables any canes missed during the initial process to be readily identified and treated with a re-application as part of the treatment programme.

With most of the initial treatment at The Royal Parks carried out last summer, it was, however, only with the arrival of this year's growing season that the full extent of the eradication success could be recognised.

As effective as stem injection can be in treating existing infestations, large parkland areas such as this will, however, always be vulnerable, and there remains the continual threat that Japanese Knotweed could be re-introduced to the parks in the future, either naturally or as cross-contamination from other sites. Recognising this, and because The Royal Parks continues to take the management of the problem very seriously, a stem injection team was brought in this summer to train gardening staff on how to identify and treat the problem themselves in the event of future contamination.

Reinforcing the message that treatment programmes and ongoing client education go hand in hand, training sessions have been carried out with the grounds maintenance contractor's forty-five gardening staff, highlighting awareness and identification of Japanese Knotweed and other equally invasive non-native weed species such as Himalayan Balsam and Giant Hogweed.

Separately, a smaller number of gardeners are being specifically trained in the application of the stem injection system, so that, longer term, The Royal Parks can invest in the applicators and carry out treatment on new infestations in-house. 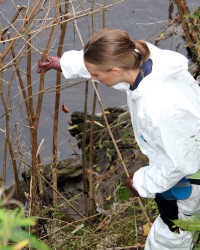 Speaking about Japanese Knotweed Control, the company brought in to carry out the stem injection, and its sister company, Stem Injection Systems, that provided the training, Andy Williams commented: "We have been delighted with its approach to managing the knotweed problem as well as its willingness to work with our grounds and gardens staff on this issue. Increasing overall awareness, understanding and investment in training will deliver significant, longer-term benefits for Regent's Park, Primrose Hill and, potentially, all of our Royal Parks."

If one of London's main knotweed problems is in its parks, in the Scottish Borders it is the potential impact on riverways that is currently preoccupying environmentalists. A current Scottish Environment Protection Agency (SEPA) project to tackle non-native plant species (INNS) in the Dumfries and Galloway area, is also using state-of-the-art stem injection equipment.

The project officers using the equipment are working for Nith District Salmon Fishery Board (DSFB) and Annan DSFB on a Japanese Knotweed control programme in the River Nith and River Annan catchment areas. These are two of several organisations involved in the five year project which has been part funded through SEPA's Restoration Fund.

The INNS project will focus on eliminating Japanese Knotweed as well as Himalayan Balsam and Giant Hogweed, all of which are growing in increasing numbers along the river corridors, and having a serious impact on the biodiversity of the riparian environment and, consequently, on the aquatic environment.

SEPA South West operations manager, Robert Kerr, has forthright views on the scale of the problem: "The issue of invasive species is a national one, threatening biodiversity across the UK. Their ability to colonise many areas has resulted in damage to our environment, the economy, our health and the way we live."

Jim Henderson is Director of Nith DSFB which is responsible for preserving, protecting and enhancing stocks of migratory salmonids within the Nith catchment. "This increasing problem with invasive plants has to be tackled in a concerted way, starting at the top of the river corridor and extending catchment-wide to try and eliminate the spread of seeds," he said.

Just as The Royal Parks considered all the treatment options, and referenced similar programmes in action before committing to stem injection, so SEPA fully researched what was available before Jim Henderson made his decision: "Having examined various treatment techniques, it's my belief that spraying only suppresses plant growth until the following season, whereas the stem injection system appears to deliver a complete kill."

"Although we're learning all the time about how best to control invasive, non-native species, this SEPA project feels as if we're at the forefront of some very pioneering environmental work. I believe that this type of stem injection treatment will be seen as the blueprint for successful river basin weed management for years to come," said Jim.